Barsoomian handshake
hands gripped at the shoulder of the one greeted. Intensity of greeting indicated by one or two handed grip. (Gods)
Barsoomian salute
hands held to the shoulders, palms backward. (Gods)
battle hymn
sung by the women of Helium as their warriors go into battle.
collars and chain
a marriage custom (Princess, Thuvia), see handcuffs. 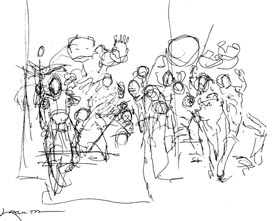 Dance of Barsoom
described in Chessmen of Mars.

Slaves were passing among the guests, distributing small musical instruments of a single string. Upon each instrument were characters which indicated the pitch and length of its tone. The instruments were of skeel, the string of gut, and were shaped to fit the left forearm of the dancer, to which it was strapped. There was also a ring wound with gut which was worn between the first and second joints of the index finger of the right hand and which, when passed over the string of the instrument, elicited the single note required of the dancer.
---
The Dance of Barsoom bears a relation similar to the more formal dancing functions of Mars that The Grand March does to ours, though it is infinitely more intricate and more beautiful. Before a Martian youth of either sex may attend an important social function where there is dancing, he must have become proficient in at least three dances--The Dance of Barsoom, his national dance, and the dance of his city. In these three dances the dancers furnish their own music, which never varies; nor do the steps or figures vary, having been handed down from time immemorial. All Barsoomian dances are stately and beautiful, but The Dance of Barsoom is a wondrous epic of motion and harmony--there is no grotesque posturing, no vulgar or suggestive movements. It has been described as the interpretation of the highest ideals of a world that aspired to grace and beauty and chastity in woman, and strength and dignity and loyalty in man.

face paint
adornment specifically stated regarding the warriors of Manatos, but appears reasonable for the other red human races of Barsoom as well.
feathers
adornment worn by males in both green and red martian cultures.
Games, Greater and Lesser
arena combats hosted by many of the cities or nations of Barsoom, usually fatal to the participants.
handcuffs
used in the marriage rites of Manator. See collars and chain.
Jeddak's Award
presented to the best artist each year.
Jetan
a board game similar to chess fully detailed in the Appendix to Chessmen of Mars. A full description is available from A Barsoom Glossary.
language, oral
a single common tongue is spoken world wide, understood by all races, including the savage green men.
language, telepathic
telepathic communication appears universal between humans and some of the higher orders of beasts.
language, written
various among the cities. No two nations of Barsoom have the same written language, although there is a common scientific language understood by the savants of all nations... Implies a common written language for scientists. each nation has a different written language, but many of the characters and words are common between them, except in Bantoom (Chessmen).
lawyers
There are no lawyers on Barsoom. (Princess).
"my chieftain"
Martian maid's expression of acceptance of a male suitor, instant marriage.
"my princess"
see above, male expression and response to "my chieftain," or is a declaration to marriage.
nudity

much has been made by the unsophisticated reader that Barsoomians eschew clothing. In reality, the races of Mars are clothed, but in such a manner that a Victorian or Edwardian mentality would view them as "naked" meaning "without trousers." The term "trappings" as often used by John Carter to describe the apparel of Barsoomians indicates a form of clothing that leaves the arms, legs, and torso bare (naked, meaning "uncovered") while providing sufficient cover and utility to support weapons, pouches, leather harnesses, sandals, boots, various jewelry and armbands, helmets, cloaks and, in the far north, parka-like garments manufactured from orluk skins.
The Song of Love
- reputed to be the world's (Barsoom's) most beautiful melody. (Chessmen).
Sword Rite
an oath of fealty.

"Ah, my Prince," he continued, as though no thought had interrupted his greeting, "that you are back is sufficient, and let Hor Vastus' sword have the high honour of being first at thy feet." With these words the noble fellow unbuckled his scabbard and flung his sword upon the ground before me.
Could you know the customs and the character of red Martians you would appreciate the depth of meaning that that simple act conveyed to me and to all about us who witnessed it. The thing was equivalent to saying, "My sword, my body, my life, my soul are yours to do with as you wish. Until death and after death I look to you alone for authority for my every act. Be you right or wrong, your word shall be my only truth. Whoso raises his hand against you must answer to my sword."
It is the oath of fealty that men occasionally pay to a Jeddak whose high character and chivalrous acts have inspired the enthusiastic love of his followers. Never had I known this high tribute paid to a lesser mortal. There was but one response possible. I stooped and lifted the sword from the ground, raised the hilt to my lips, and then, stepping to Hor Vastus, I buckled the weapon upon him with my own hands.

Yano
a game not described anywhere in the novels. A full description is available from A Barsoom Glossary and comes from the notebooks of Edgar Rice Burroughs.

A warrior may change his metal, but not his heart.: Dejah Thoris

Blessed be your ancestors for this meeting.:

Blessed be the shell of thy first ancestor.: First Born

By your first ancestor!: Thuvia

In the name of the Ninth Ray!: exclamation of surprise

Leave to a Thark his head and one hand and he may yet conquer.: Tars Tarkas

Man builds naught that man may not destroy.: Larok

May my ancestors have mercy on me.: Thuvia

May the white apes take us all!: Thuvia

Only our first ancestor knows.:

Praised be to our first ancestor!: Thuvia

The intellects of our ancestors are with us.: Thuvia (21)

Chief
Edgar Rice Burroughs' interpretation of Barsoomian terms for jeds, princes, or high-ranking officers. In some areas of Barsoom is equivalent in rank to "king."
Council of Seven Jeds
rank/title: the ruling class of Morbus.
Dator
rank/title: a prince of the First Born.
Jed
King
Jeddak
Emperor, King of Kings
Jeddarra
Empress, Queen of Kings
King
Used only to describe the kaldane leaders
Prince or Princess
Frequently appears in the royalty of the red Martians, usually regarding off-spring of Jeddaks or Jeddaras

Daughter of the Lesser Moon
Issus
Death upon Barsoom
Matai Shang's Hekkador alias
Father of Holy Therns
Matai Shang; leader of a religious cult
Goddess of Death
Issus
Goddess of Life Eternal
Issus
Hekkador
High rank in Thern sociey
Holy Hekkador
perhaps same rank as Hekkador
Master of Life
Matai Shang
Mother of the Nearer Moon
Issus
Ninth Cycle
Rank one level below Hekkador
Tenth Cycle
Rank of Hekkador
Therns of the Tenth cycle
Hekkadors; cannibalistic, though they will not touch human flesh which has not been thoroughly drained of blood by the vampiric plant men.
thorian
a Rank of Hekkador