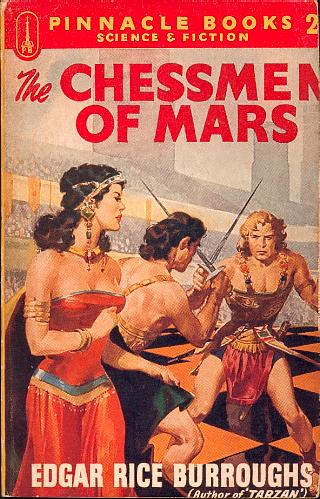 Edgar Rice Burroughs detailed Jetan in The Chessmen of Mars. It is a very playable game that is easy to learn and, like traditional Chess, can be difficult to master.

The board is 10 by 10. Squares are alternately colored black and orange, a reference to the legendary war between the Yellow race at the north pole and the Black race at the south. The board is usually placed in this relationship, orange-North, black-South.

Game play involves alternating moves using twenty black pieces opposed by twenty orange. The first move is decided in any way agreeable to both players; after the first game the winner of the preceding game moves first if he chooses, or may instruct his opponent to make the first move.

The game is drawn when either chief is taken by a piece other than the opposing chief, or when both sides are reduced to three pieces, or less, of equal value and the game is not won in the ensuing ten moves, five apiece.

The Princess may not move onto a threatened square, nor may she take an opposing piece. She is entitled to one ten-space move at any time during the game. This move is called the escape.

When a player, moving properly and in order, places one of his pieces upon a square occupied by an opponent piece, the opponent piece is considered to have been killed and is removed from the game.

Straight means rank and file (north, south, east, or west); diagonal means northeast, southeast, southwest, or northwest. A Dwar might move north three spaces, or north one space and east two spaces, or any similar combination of straight moves, so long as he did not cross the same square twice in a single move.

The Martians gamble at Jetan in several ways. Of course the outcome of the game indicates to whom the main stake belongs; but they also put a price upon the head of each piece, according to its value, and for each piece that a player loses he pays its value to his opponent.