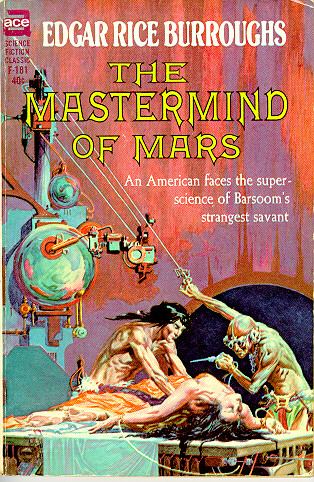 Barsoomian technology is a curious mixture of the sophisticated advanced scientific society and the primitive innocence of barbarism. Mars, according to Edgar Rice Burroughs, has a human history spanning millions of years and in that time races have risen to scientific heights exceeding our planet and then faded to memory as a younger, more vital race emerges. Much of the technology has been passed down over the ages, but a significant part of the elder races' knowledge has been lost. For example, the great atmosphere plant created by the Orovars as the oceans of Mars evaporated, has never been duplicated by the red race which now maintains the gigantic device. Methods of cold light, radium light, or some forms of manufacturing have been lost. Yet, for all the knowledge lost there remains a significant core of scientific study that is astounding.

-- range in size from single seaters to 10,000 man crafts.* The swift scout flier (pre-Fighting Man of Mars) had a top speed of 1,100 haads per zode (166 mph). At some time before the events of Fighting Man, an unknown padwar in the Helium navy developed a new motor with half the weight and twice the power. The motor depended upon the planet's magnetic field for energy, thus was practically unlimited in range. The new one-man fliers built with that motor achieved speeds of 2,000 haads per zode (approximately 300 mph). Effective max appears to be 3,000 haads per zode until better ship building methods are developed. Hastor launched the largest battleship ever, with the capacity to carry 10,000 men (Fighting); John Carter and Vor Daj left Helium (Synthetic) in a small cruiser of new design that could attain speeds over 400 mph.

* There is only one 10,000 man craft mentioned. It is unnamed and is a vessel of Hastor. The 10,000 men are actually a military landing force called a Umak. An Earth Army unit of similar size is a Divsion, which comprises three Brigades. The rest of the "battleships" of Barsoom appear to be 1,000 men in size. (Update, December 14, 2020)

Airships play a vital role in the Barsoomian novels. The vessels of Barsoom are of varying sizes ranging from personal units not unlike surfboards in size and shape to immense 10,000 man battleships. These airships are found in every novel. The airship, or "flier" as it is called in the books by Edgar Rice Burroughs, connect the widely separated and isolated Barsoomian communities for either trade or war. All follow a basic configuration as illustrated in the image below.

It is apparent that Barsoomian airships are constructed in configuration similar to surface water vessels as the First Born have routinely converted stolen Barsoomian fliers for use on the surface of the underground Omean Sea.

In the matter of equipping a fleet to enter Omean the details were left to Kantos Kan and Xodar. The former agreed to take such vessels as we required into dock as rapidly as possible, where Xodr would direct their equipment with water propellers.

For many years the black had been in charge of the refitting of captured battleships that they might navigate Omean, and so was familiar with the construction of the propellers, housings, and the auxiliary gearing required. (GODS)

Equally apparent are the immense numbers of Barsoomian airships. In Gods of Mars Kantos Kan assembled a substantial rescue fleet of modified Heliumetic warships over a period of 300 days without arousing the suspicion Zat Arras, a Zodangan jed then currently in control of Helium.

"To-night there lies about the great docks at Hastor a fleet of a thousand of the mightiest battleships that ever sailed above Barsoom, and each equipped to navigate the air of Omean and the waters of Omean itself. Upon each battleship there are five ten-man cruisers, and ten five-man scouts, and a hundred one-man scouts; in all, one hundred and sixteen thousand craft fitted with both air and water propellers." (GODS)

"At Thark lie the transports for the green warriors of Tars Tarkas, nine hundred large troopships, and with them their convoys. ..." (GODS)

Facts/statements found in the texts that are general in nature: Upon each battleship there are five ten-man cruisers, and ten five-man scouts, and a hundred one-man scouts (Gods). An Amhorian airship of some size traverses 750 earth miles in seven and one-half earth hours, indicating a cruising speed of 100 miles per hour. (Synthetic)

artificial life
— see hormads
atmosphere factory
— an ancient constuct built by the Orovars and operated by the red Martians which provides the artificially generated atmosphere of Mars. (Princess, Llana)
atom gun
- hand weapon described as a pistol or rifle in Giant of Mars.
brain and organ transplants
and other surgical/medical miracles (Master Mind, Synthetic).
canals
— man-made waterways transporting water from the polar caps into the inhabited regions of Barsoom. Generally bordered by trees and agricultural areas, often accompanied by a broad roadway.
carborundum aluminium
— a light-weight material, nearly impenetrable, used in the construction of Barsoomian fighting airships.
computers
— mechanical brains; a device capable of responding to telepathic commands and utilized in Fal Sivas' spaceship (Swords)
Destination Compass (directional compass)
— a aerial navigation device which Carthoris improved. In operation one sets the desired latitude and longitude. The device then navigates to the location, then shuts down the propulsion and lowers the craft to the group. It also has altitude ranging which operates by reflected light (think lasers) which prevents ground collision. The device is so light sensitive that it functions by starlight, or in the event of the rare occasion the night sky is covered with cloud, by the beam of a downward directed artificial light.
Directional lighting
of cities, see street lighting below (Swords)
Disintegration Ray
— invented by Phor Tak of Jahar; a weapon which can be set to selectively destroy organic or inorganic materials. (Fighting)
Eighth Ray
— a form of antigravity produced from forces emanating from the planets and stars.
Electromagnetic devices
— most significant is the Guardian of the North, a vast magnetic device built over the North Pole for the defense and destruction of airships. (Warlord and Thuvia)
elevators
— identical in function to the Jasoomian equivilant. (Swords)
Equilibrimotors
— personal flying belts based on the Eighth Ray;

The equilibrimotor is an ingenious device for individual flying. It consists of a broad belt, not unlike the life belt used aboard passenger ships on Earth; the belt is filled with the eighth Barsoomian ray, or ray of propulsion, to a sufficient degree to equalize the pull of gravity and thus to maintain a person in equilibrium between that force and the opposite force exerted by the eighth ray. Attached to the back of the belt is a small radium motor, the controls for which are on the front of the belt; while rigidly attached to and projecting from the upper rim of the belt is a strong, light wing with small hand levers for quickly altering its position.

fliers
— Barsoomian airships ranging in size from personal one-man filers to 1,000 man battleships*. When John Carter first arrived on Barsoom, top speeds were 166 miles per hour. By the end of the series speeds approaching 550 miles per hour were attained. (see Airships)