This section examines the various cultural aspects of the Barsoomian races, the plants and animals, technology, and listings of weights, measures, time, and currency. Edgar Rice Burroughs created an incredibly detailed background for his Barsoomian novels. It is the very detail presented that induces the reader to willingly suspend disbelief and to fully participate in the adventures of John Carter and the many heroes of the desert world of Barsoom. 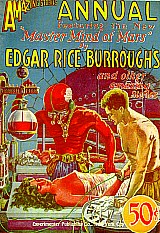 The Barsoomians, particularly the white and red races, developed technologies which have enabled them to sustain life on a dying, desert planet. Radium (not to be confused with the Earth element by the same name) efficiently powers lights and machines for centuries, a near source of perpetual energy. A form of cold fusion is found as well as a reliance upon great electro-magnetic devices for public or defense uses. Communications over great distances, including exchanges with the Earth via the Gridley Wave, keep far-flung outposts connected with their central governments. Medical miracles — even by today's standards — are common place. Even the nomadic green men have a level of technical sophistication in the manufacture of incredibly long range and accurate rifles.

But for all the technology that exists, so much more has been lost in the ages of antiquity. Barsoom is a curious mixture of old and new technologies.

Author's note: Many of the scientific achievements of Barsoom have been eclipsed by today's Earth technology. To fully appreciate ERB's vision and creativity, it is necessary to view the Barsoomian novels in light of existing technology when the stories were first written. For example, powered flight of heavier-than-air craft occurred less than a decade before the release of "Under the Moons of Mars" (1911), automobiles were more novelty than general transportation, and radio was still in the infancy of Morse code. A great many of Edgar Rice Burroughs' predictions and speculations have come to pass over the years, but nearly as many have yet to be achieved.