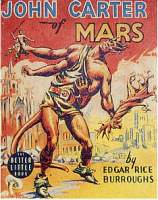 When John Carter and the Giant of Mars was published in Amazing Stories Quarterly in 1941, it was met with an out-pouring of correspondence suggesting the story was not a work by Edgar Rice Burroughs. Rothmund, ERB's secretary, included a number of quotes into a memo sent to Burroughs which included the phrase: "...sensed the fact that you did not write The Giant of Mars. Apparently, you put too much "English" on your words for anyone else to duplicate...." It was not until much later that Hulbert Burroughs revealed the truth. "Giant" was a collaboration between ERB and his youngest son John for a Whitman Big Little Book. Whitman's publishing format was very rigid, allowing no more than 15,000 words and facing pages illustrated the text action of the page following. John "Jack" Coleman Burroughs illustrated the Whitman book. In 1941, while ERB was overseas, 6,000 words were added to Giant and the revision was sent to Amazing. It is not known if ERB actually worked on the Amazing expansion, nor how much time was invested in the Whitman version.

This story was written by John Coleman Burroughs. It first appeared as a Big Little Book story in 1940. The text followed in the summary below was published in Amazing Stories Quarterly, Volume 1, no. 4 fall 1941. It was reprinted in Amazing Stories, January 1964. The first book edition of this tale was Canaveral Press, Inc., July 24, 1964. The first paperback edition was by Ballantine Books, April 1965 in the volume entitled John Carter of Mars which also contains The Skeleton Men of Jupiter. John Carter and the Giant of Mars was written in 14 short chapters.

John Carter & Dejah Thoris ride a single thoat through the lonely Helium Forest to inspect their kingdom. They are attacked by an arbok, a tree reptile, and Dejah disappears. The thoat has been killed by a bullet from an atom gun, so Carter runs home to find a ransom note. He is to give up the iron works of Helium to Pew Mogel in three days or Dejah will lose her fingers. Kantos Kan and Tars Tarkas make plans for Dejah's rescue after quickly eliminating a spy who tries to kill Carter. Tars will go east; Carter will go west with Kantos Kan waiting at Helium with the entire air force on alert.

John Carter was the leader of 24 fast, one-man scouts that scattered to cover all the territory in their district. At midnight Carter receives a message from Kantos Kan that Tars Tarkas has found Dejah in a deserted city on the banks of the Dead Sea at Korvas. Carter goes there to meet Tars at the main bridge as instructed where he is attacked by white apes. He escapes the apes but is picked up by a giant hand.

Joog, a 130-foot tall giant, carries John Cater to a ruined palace and puts him in a tower room. Carter hears a scream and wonders if it could be Dejah Thoris. He tries to move to an adjoining tower along a ledge while Joog sleeps at the foot of the tower, but the giant awakens and throws him back through the open window. Carter escapes from the room through a secret passage that takes him beneath the tower where he finds a strangely preserved red warrior, who turns to dust when he strikes his arm with his sword, and scores of beautiful women slaves similarly preserved. Carter is attacked by gigantic, three-legged Martian rats who stun him after a terrific half-hour battle and drag him down a tunnel.

Chapter Four: The City of Rats

John Carter is dragged by the rats to a huge underground cavern where the rats live in mud huts built on frameworks of human bones. He is brought before the King of Rats where thousands of rats perform a weird ring dance around mounds of human bones. Carter cuts the head off the King Rat and leaps 50 feet in the air to a stalactite, then escapes into a cave in the ceiling. Carter goes through a massive door into a gleaming white laboratory. Glass cages are filled with white apes with their heads swathed in bandages. A pit in the floor reveals red warriors with the tops of their heads neatly sliced off.

John Carter finds a book, "Pew Mogel, His Life and Wonderful Works," but before he can look into it, he is instructed by a voice over a loudspeaker to go into a throne room where he meets a misshapen man, Pew Mogel. Pew has been observing Carter's progress by means of a television screen. Pew is a pupil and creation of Ras Thavas. He has a microcephalic head and is crafty but quite mad. He has no eyelids, so he can not blink. Pew Mogel shows Carter that Tars, Tarkas chained to a revolving pillar. They have both been trapped by a message from Pew. Pew Mogel's eye pops out, but he does not notice. He tells them he has created Joog from the flesh of 10,000 red men and white apes. He replaces his eye as he informs them he plans to transfer his brain into a more normal-looking body.

Pew Mogel is one of Ras Thavas's synthetic men. He escaped from Morbus to set up his own laboratory and has plans to rule all of Barsoom. Pew has transferred the brains of red men criminals into the bodies of white apes to that they might escape detection. Joog is nearly indestructible because his tissues are rapidly self-repairing. He with the white ape-men make up the conquering army of Pew Mogel. Pew Mogel shows Carter Dejah Thoris chained to another revolving pillar. Her price of ransom is the Helium iron works, which he wants to make more weapons of war. John Carter leaps toward his mate, but is stopped by an invisible glass partition. Dejah is "tortured" by being kissed by a white ape. Pew tried to squeeze Carter between glass partitions, but he cuts his way out with his diamond ring. Pew then calls for Gore, a white ape.

Gore struggles with Carter but is kicked out a tower window to his death. Pew orders Joog to pick up Carter, so he is drawn through a window by a giant hand. He is taken to the arena and placed in a cage over a pit filled with water, then Tars and Dejah are brought by the giant and placed in similar cages on either side of him. Pew flies into the arena on a malagor. (A malagor is a huge, extinct Barsoomian bird recreated by Ras Thavas for his Hormads to ride in Synthetic Men of Mars.) Thousands of white apes that fill the arena mount malagors and circle above the caged trio. This is Pew's army. They are armed with small canons and sub-machine guns. Pew tells them they will soon be eaten by reptiles that swim in the pit below, then his army flies off toward Helium with Joog in tow carried in a sling by a hundred malagors.

Carter learns from Tars that Pew has sent a false message to Kantos Kan drawing the airfleet of Helium away to the Great Toonolian Marshes a thousand miles away from the city. They are lowered into the water in the pit by a white ape, who promptly falls asleep. John Carter swings his cage back and forth until he can reach the sleeping guard and the key to the cages. After a brief struggle with the reptiles, they all escape. The undaunted trio fly on malagors to the City of Thark, inhabited by a hundred thousand green warriors over whom Tars Tarkas ruled. An army of green men mounted on thoats ride toward Helium at dawn of the following day led by Tars Tarkas himself. John and Dejah ride above them on a malagor.

Pew attacks Helium with all of his forces. Kantos Kan has taken the bait, so the fleet of Helium is gone, but a messenger has been sent on a malagor to bring them back. White apes fly over the city on their malagor dropping bombs on the nearly defenseless people. "Fifty thousand years of Martian learning and culture wrecked by a power-mad maniac -- himself the synthetic product of civilized man!" The next morning, the green men lead a desperate charge upon the city to save what might be left of it, when at the same moment the fleet of Helium appears. The green men on thoats have to fight the flying white apes as the fleet draws near, but just as it seems that they might be saved Joog appears holding a huge tree trunk in his mighty hand. In a steel howdah strapped to the top of Joog's helmet rides Pew Mogel. Twenty of Helium's ships are downed by a single blow of the giant.

The fleet regroups and spreads out to fight the giant, but his rapidly regenerating tissue is not affected by even thousands of bullet or ray wounds. "It is probable that he will live and grow forever unless something drastic is done to destroy him." Carter tells Tars to take his men into the mountains, then he flies to Kantos Kan and orders the fleet to retreat as well. Carter and Dejah have fought the entire battle together on the back of the malagor, which they now release. They need to re-form for a new attack. Carter orders up ten of the largest planes, each loaded with ten men and 200 parachutes.

Carter is gone for 24 hours. When he gets back with the secretly prepared ships, Joog is still busy throwing boulders into the city. He tells Kantos Kan that when he sees the giant raise and lower his arms three times it will be time to carry out his orders. Carter bids a sad farewell to Dejah Thoris, then flies a speedy, one-man airship toward the giant.

Chapter Twelve: The Fate Of A Nation

Carter flies his ship down upon Pew Mogel's glass howdah from straight above and crashes through. Pew's left eye pops out, but he manages to sword fight with Carter, but not until he is able to give the signal to Kantos Kan. Looking out the window Pew gets a surprise.

The malagors panic when they see thousands of three-legged Martian rats descending in thousands of parachutes. The rats are their hereditary enemies. Tars attacks from the ground and the fleet of Helium commands the air now that the malagors have fled. Pew commands Joog to "Kill! Kill! Kill!" Carter cuts Pew's head off, but he still manages to swing his sword wildly and the head rolls around the floor. He can't be killed because he is a synthetic man. However, Pew's body walks out the open door, and Carter throws the head after it. Joog fights on, mowing down Carter's troops and planes. Finally, Carter gets the microphone that controls Joog's actions and commands him to stop. The white apes run for the mountains pursued by the green men and angry rats. John tells Joog to lie down, and he steps from the howdah. Then he tells Joog to "Go to Korvas." Joog snarls.

Finally, Joog sighs and heads off for Korvas. Carter decides to set him free because he does not want more killing. Carter and his men got the rats into parachutes by knocking them out with smoke in their tunnels. They kept them unconscious with smoke until they released them in the air. There is a great feast in Helium for red men and green men alike. Tardos Mors gives a speech of thanks, and John Carter embraces Dejah Thoris under the moons of Mars.