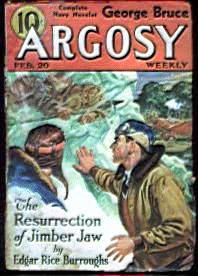 I first came across this short piece in Tony Goodstone's The Pulps. Its earlier appearance in Argosy (Feb. 20, 1937) can be found by pulp collectors, but for the most part this is not a well-known tale. The tale is told complete in the issue in five numbered parts, so this is one of the few Burroughs installments that doesn't leave a reader waiting for the rest of the story. Zeuschner reports that Burroughs wrote the story in three days, March 1936. In addition to Goodstone's anthology, the story has appeared in Tales of Three Planets (which also contains the Burroughs novelettes Beyond the Farthest Star and The Wizard of Venus), Masterpieces of Science Fiction, ed. Sam Moskowitz, and The Fantastic Pulps, ed. Peter Haining.

Pat Morgan meets and befriends the narrator in a bar. Their friendship develops. Morgan had been a young pilot in the First World War but didn't talk about it. He later became a movie stunt pilot. One day when the narrator was talking with others about the disappearance of a famous athlete and movie star named Stone, Morgan enters with a newspaper and his own story.

Morgan narrates that after his wife's and grandfather's deaths, he developed an experimental airplane motor and fuel. Unsuccessful in selling his invention to the U.S. government, he strikes a deal with the Russians. In negotiations he meets Professor Marvin Stade. Stade specializes in cryogenics. Together Morgan and Stade fly to Moscow. En route, over Northern Siberia, the engine malfunctions. With calm efforts and frantic eyes, Morgan manages to land on a spit of ground at a river's bend. The cliff beside them is founded on ice. Meager hunting gives them a little food. It begins to rain. The river rises, threatening to float them and the plane down stream. Morning shows the water receding and a new channel. The cliff face had eroded fifty feet. Stade discovers a bearded man frozen in the ice at the new cliff bottom. Morgan, half-jokingly, tells Stade to thaw the man out while he works on the airplane motor. Stade blinks, considers, then tells Morgan he will have to help.

Morgan becomes ill, chills and fever, while Stade works. Two weeks to build a hut for a laboratory and two weeks to chip the man out of the ice elapse. Morgan names the man Jimber-Jaw after a grizzly bear he had seen in Yellowstone. Morgan's illness continues to impair his ability to help significantly, but he watches. They commence to thaw the man with Stade's precision and speculate what the man will do if he does return to life. Stade performs a blood transfusion, using Morgan as the donor, and injects the stone-age man with adrenalin chloride. The man yawns. Stade administers more injections of other solutions and Morgan passes out. Morgan wakes to find Jimber-Jaw sleeping in blankets on a bench. When Jimber-Jaw wakes, he looks for his weapons, tries to rise but lapses back into sleep. Weeks of convalescent care bring him back to health. Morgan teaches him English. He learns enough English to tell them that "he had been hunting the great red bear when the glacier had claimed him." He believes he has slept only one night. Though Morgan and Stade try to explain the lapse of time, he vows he will find Lilami, his intended mate.

By the time the three men leave the forest, Jimber-Jaw has learned to shave. In Moscow, they are treated as spies, authorities disbelieving Jimber-Jaw's story, and are rescued by the American ambassador on condition that they never return to Russia. They decide not to tell anyone about where Jimber-Jaw had come from. Stade leaves him in Morgan's care, while attending business in Chicago. Morgan passes him off as an old friend, Jim Stone. While acculturating him, Morgan takes him to a wrestling match, where Jim jumps into the ring and throws both contestants into the crowd. He is hired to face the winner. He makes a name for himself by throwing each opponent thereafter into the seats. He is then hired to box, which is also a success for him. While negotiating a movie contract, Jim sees Lorna Downs on screen, whom he immediately calls Lilami. He identifies himself as Kolani and ruins the screen trying to get to her.

Downs, on tour at the moment, will be returning to Hollywood in a few weeks. Jim says he will wait for her. As Jim enters movie circles, he questions the morality of women who show so much skin and act just like men. Such women, he says would be killed in his society, unfit to raise children. Jim believes Downs is different. When Jim and Downs meet, she first rebuffs him, then, after some explanation from Morgan, consents to "be nice to him." After several weeks of spending time together, Downs goes to a party without Jim and without informing him. He finds her, pulls her off the man she was with, hurls the man away and faces Downs. She slaps him and tells him to "get out and stay out." Repressing his fury, Jim turns and walks away, disappearing from society. Morgan signals for another drink and says, "That's the story of Jimber-Jaw." He points to the newspaper story. Jim had been found in "the frozen-meat room of a cold storage warehouse" with a note addressed to Morgan pinned to his lapel. Only Morgan understood the words: "I go to find the real Lilami. And don't thaw me out again."