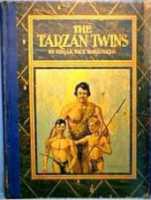 Dick - the "twin" related to Tarzan

Summarized by
David A. Adams

Dick and Doc are not really twins, but cousins born to twin sisters. The sisters were American girls, but Dick’s mother married an Englishman, a distant relative to Lord Greystoke. Dick and Doc looked alike but for their hair - - Dick had “a shock of the blackest sort of hair, while Doc’s “was the sunny hue of molasses candy.” They both had blue eyes.

At the age of 14, the boys attended school in England together where they picked up the title of “The Tarzan Twins” due to Dick’s heritage. They were not particularly athletic, but when they were teased for being related to Tarzan they began to excel in nearly all athletic sports and climbing trees.

The boys are invited to spend two months on Tarzan’s African estate. They are allowed to go by themselves when their parents are unable to accompany them. Tarzan is to meet them at the end of the railway with 50 Waziri warriors.

Chapter One - Off To Africa

On the train, Doc passes the time by doing magic tricks, slight of hand coin maneuvers. Their railway carriage is derailed, and the boys go into the jungle. They wander some distance, then hearing a terrific roar, run back along the wrong trail.

Retracing their steps, the boys meet a Numa, a great black-maned lion. They run for the trees, and Dick saves Doc by turning back to help him when he is tripped by a root. The boys start off through the trees, hoping to reach the train. but night falls.

The boys have to sleep in the crotch of a mighty jungle tree all night long. They awake cold and hungry. Daring the ground, Doc tries to start a fire by rubbing two sticks together. (There is much of the playful comic banter that is a hallmark of this book.) They head off through the trees again, Dick in the lead, and finally have breakfast by eating the same fruit the monkeys are eating.

They find a game trail which leads to a cannibal village. They are followed by Zopinga, a Mugalla of the Bagalla tribe, the all-powerful ones in Ugalla.

Chapter Four - Prisoners of the Bagalla

Seeing the village, the boys turn back but are herded at spear-point into the enclosure by Zopinga. The natives have teeth filed into sharp points. The children throw stones at the boys, and Dick saves Doc from a blow from a heavy stick by punching a native boy in the face. They are led before to fat negro, whom they take to be the chief. (There are instances of racial slurs in the text, “Big Boy,” “Uncle Tom.”) They try to communicate without success, and are literally kicked as captives into a stinking bee-hive shaped hut.

In the hut the boys meet two other captives. One is Bulala, “a densely ignorant, but happy-natured West Coast black” who was captured while running away from a safari where he had been a cook. The other is Ukundo, a smarter pygmy, who teaches them his language. They fall asleep that night knowing they are in the midst of cannibals.

In the morning the boys are taken before Chief Galla Galla. He promises to release them in a few days if they will give him their clothes. (Bulala is the translator in this exchange.) While changing into filthy calico rags, the chief demands Doc’s fountain pen. Doc tells him it is something to drink, and the chief spits blue. They try to hide their knives, but the chief demands them also. Doc does his disappearing trick, pulling the knife out of Galla Galla’s left ear, and this surprises him so much that he falls off his stool. When he still demands the knives, Doc tells him they are hidden in the head of the boy whom Dick had struck the day before.

They are kept prisoner for many hot days and cold nights. They eat the horrible food provided them, and learn to speak the language of Ukundo; learned to speak in a dialect that all could understand; learned to understand that of their captors, the Bagalla.

The boys are allowed the freedom of the village compound during the day due to the threats of the white boy witch-doctor, Doc. Paabu, the boy whose head holds Doc’s magic, fears that Galla Galla will harm him to find the secret. Intamo, the ugly, evil witch-doctor of the Bagalla, has persuaded Galla Galla to crack open Paabu’s head like a nut. However, Doc pulls the knives out of Paabu’s ear before Intamo can strike him with his knobkerrie. He then places the knives in the witch-doctor’s head, suggesting that the war club could be used on him as well. The boys have a dangerous enemy.

That same afternoon guests arrive for the cannibal feast. Bulala is taken away to another hut, and the boys ask Ukundo to help them escape. Doc promises to prevent the night demons from harming them.

That evening, as the cannibals are getting the cooking pots ready, Paabu warns them that Intamo, the evil witch-doctor, intends to poison them. Paabu promises to bring them four knives, four spears, and four bows and some arrows in exchange for one of Doc’s magic knives. They bury the poison food and wait for Paabu to return.

Tarzan and his fifty Waziri are looking for the boys. They have been misled by a lying Mugalla, but they plan to go to the village of Galla Galla in the morning.

Paabu returns with the weapons. The cannibals are preparing for the feast, which will happen the following evening. As soon as the natives retire for the night, Intamo comes to their hut and tries to kill Doc with his knobkerrie. Dick intervenes with a spear, but it is Ukundo who kills the evil one with his knife.

They go to the hut that holds Bulala, and Ukundo enters the gloom and brings him out. They remove the chain from the village gates, but the noise awakens the village dogs. The cannibals come with their spears but are afraid to go into the jungle at night as the four prisoners run away amidst the demons of the darkness.

Ukundo, master of jungle craft, leads them through the mass of tangled vegetation. Ukundo tells them a lion is coming, and they run through the absolute darkness. The boys find a tree but no branches to climb. Dick jabs his spear into the darkness and feels a heavy body strike, throwing him to the ground. Doc finds a tree they can climb, and they listen to the angry lion thrashing about in the underbrush. Ukundo and Bulala have also found trees to climb, so they decide to stay there until morning.

At first light, they find a dead lion impaled by Dick’s spear. Dick wants at least the head, but he settles for taking the lion’s tail.

The boys proceed with bleeding feet and bodies torn and scratched by thorns. When they reach a clearing, they are attacked by three-score Bagalla warriors. They all decide to stand and fight. The boys can’t shoot the native bows well enough to do any harm, but Ukundo kills one of the cannibals.

Just as they are about to be captured again, Tarzan and his Waziri arrive. The cannibals run away like frightened rabbits. Tarzan calls them “brave lads.” And continues, “In the jungle only the brave may live. I am very proud of you.”

The boys introduce Ukundo and Bulala to Tarzan, who promises them a reward. Doc asks for a whole apple pie.