For Biography and Other Facts Regarding Edgar Rice Burroughs, see the ERBFAQ at Tangor's companion ERBList.com web site.

Edgar Rice Burroughs (1875-1950) was the creator of a multitude of fictional worlds which transformed the face of imaginative and speculative fiction during the decades between 1911 and his death in 1950.

His most famous and enduring character is Tarzan of the Apes. There's darn few places in the world where the name and story of Tarzan are unknown. The many films portraying the human raised by apes in Africa have made Tarzan a household word. But Tarzan and his mysterious jungle isn't the only character from the pen of Edgar Rice Burroughs. John Carter of Mars ranks very high as an influence upon modern science fiction and two other series, The Land That Time Forgot and At The Earth's Core were made into action adventure movies in the mid-1970s. He took us to Venus and Jupiter and to Poloda—450,000 light years from Earth. 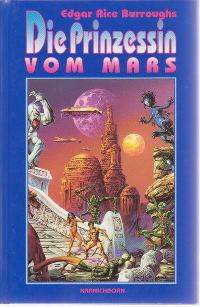 Ed Burroughs also found quite a bit to write about the people and places of our planet: European nations on the cusp of World War I, the South Pacific, the Wild West, Texas and Mexico, Chicago, California, Utah, Idaho and dozens of other places which do not come immediately to mind as I prepare this introduction.

What Edgar Rice Burroughs did best was adventure romances. There's a guy and a gal and evil afoot. Right and wrong are in contast battle. Personal choices and sacrifices must be made to win the girl, squash the evil, and right the wrongs. Each book or story is based in the classic terms of legend and literature—complicated adventure but rarely complicated for understanding.

This American author has been published in many languages and reprinted so often that millions of copies of his books exist world wide—not bad for a failed businessman who turned to writing at the age of 35 because he felt he could write equally as bad as the authors of the pulps and because he had a great desire to feed his family.

Reading Edgar Rice Burroughs as children we were captivated, but when we re-read these works as adults we tend to critically examine that which thrilled us as tykes from the viewpoint of real life experience.

I seriously doubt that any of us (at age 10 or so) paid much attention to the government, technology or world detail slipped in between action and travel and mushy stuff. I'll bet that whole paragraphs or pages were skipped just to get to the next "good part."

Every decade I re-read ERB (except Jungle Girl—can't seem to bring myself to crack the cover on that one again) and each time I find something new, something that a kid missed but the adult caught that time around. Even now I find new things, but they aren't always IN the stories, they are an understanding of the way the stories were produced. 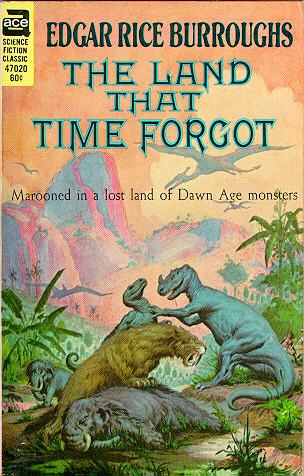 For example, the early Barsooms and Tarzans have a brash, bold, over-achieving feel. These works are from the pen of a new author, testing his wings and at the same time indulging his fantasy. By the time Ed delivered The Land That Time Forgot, he had honed his technical skills, scaled back on the flowery prose, and refined his perennial successful formula.

During the middle years his pen became a brush, painting broader strokes, less detail, more action, much like Frazetta's soft backgrounds and stark detail of central figures. Burroughs found his characteristic descriptive style and maintained that until the end of his career. Yet, there were subtle changes in attitudes at work. The real world appeared more frequently as allegory or parable, or outright insertion. The romance simplified (weariness in repetition), and the action became more episodic.

Toward the end of Burroughs' career the whole language of the stories changed considerably, more so than the gradual simplification of the first decade and a half. Though he was 40 or more years older than his average reader, his thoughts and lifestyle were those of a younger man, but a man who had seen more and endured more than the man on the street. His successes and failures entered into the stories only as far as the businessman author would allow, yet those echoes of his world reverbrate throughout the fictional worlds of his creation.

Something else is revealed over the course of the years: a dedication to produce, to work, to provide entertainment for a fair and reasonable dollar return. The high income of the early and mid-years did not last forever and in the latter works we see the businessman at work and the artist within almost desperately attempting to reclaim the prominent position once held.

The stories become more detailed and varied in color, though the famous formula is not entirely abandoned. I Am A Barbarian is the one published work that shows his desire to break out of the "Burroughs Mold". On the surface Beyond the Farthest Star appears to be different from the other works but in reality only the attitude of the characters changed. There is a weariness and finality in the last few titles written by ERB that I believe is directly linked to failing health, unhappiness in his personal life, and the setbacks and disappointments with the publishers of pulps, who were having troubles of their own.

Between the war, the binges, and the second divorce, as well as that fiend known as "Old Age", Ed eventually lost the businessman edge which had kept him at pen or typewriter for nearly four decades.

Adventure stories of the era when ERB rose in prominence (1911-1930) follow general patterns, one of which is employing a framing device to introduce the tale. Magic writing, voices from the mist, telepathic insights, the message in a bottle, fire in the sky, even a magic carpet, were literally done to death. Was this a bad thing? Not really. Each frame simply provided an avenue for the reader to suspend disbelief long enough to get into the story.

These days, with rocket ships that really go to the moon, Star Trek, Aliens, etc., the general population has an ingrained willingness to suspend disbelief but back in the late 1800s and early 1900s folks had to be led by the hand to get from "here" to "there." The many interesting methods employed are half the wonder embodied in these early works of fantasy adventure.

Ed Burroughs also had a knack for simple language, though at times his prose can be quite convoluted and flowery—pretentious. That phase, the attempt at elevating a simple adventure story to literary heights by vocabulary use alone, passed within a few years. By the mid-Twenties his language had softened and become more natural in tone. At no time, however, did ERB lose his primary goal: to entertain!

Strong, well-deliniated characters, both good and bad, male or female, in easy to follow events and situations, was the guiding light. Whether the tale was told in first person, as in a number of Barsoomian books, or third person for Tarzan and others, Burroughs was a master at pacing the action. Expository passages were kept to a minimum, but when required were dealt with completely before resuming the story. He knew how to foreshadow to introduce pre-knowledge for the reader without destroying the story by giving too much away before the event occurred. 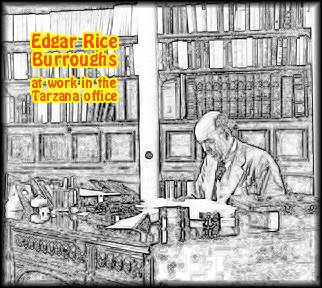 Burroughs also defined and refined episodic presentation. It was not uncommon for him to introduce a set of characters in the first few chapters of a story, then send each off on different adventures every other chapter and gradually bring them back together at the end.

What faults he may have had as a story teller are relatively few, but they are obvious to those who have read more than a handful of his books. First, Ed relied heavily on coincidence—something occuring at a most fortuitious time to facilitate a hero in a pickle. Time and again "just the thing" was found to move the characters closer to the predetermined conclusion. Second, every romance had predictable ups and downs, both male and female, which were generally characterized by personal sacrifices and self-denials. Third, the stories themselves were formulaic in plot, varying little in scope from one novel to the next. Usually we have a kidnapping followed by an 80,000 word rescue, or we have two cultures at war with a single individual providing the resolution, or we have an extended escape from pursuit. All end with the boy getting the girl, who usually turned out to be a princess or high-born lady.

If one only reads Burroughs as often as the stories were initially produced (series books every other year), it would be easy to overlook these flaws—time dulls the senses and memory. In this day and age, however, it is possible to read all the works back to back and in that context the author's reliance upon these few devices becomes most apparent. But even so—these are darn good stories and many have attempted to imitate ERB's success for the "straight action romance I got a plan and happy ending whether you like it or not" brand of story-telling. And I like it—alot!