I think I was pretty hung up on Disney as I grew up, and Disney led me into some of my adventure reading. When Davy Crockett came out, I went to the library and checked out every Davy Crockett and Alamo book, one at a time, and read them all. When Disney produced "Twenty Thousand Leagues Under the Sea," I became aware of Jules Verne and started reading him. When Disney produced Andy Burnett, that led me to the library to find Stewart Edward White's "The Long Rifle." At the same time, there were also the Classics Illustrated comics which acquainted me with people such as Verne, H.G. Wells, Mary Shelley and others, whose books I read. I was a regular at the movie theatre, and in addition to Disney movies, there were movies such as "The Time Machine," which motivated me to read that particular Wells novel.

In school, our literature book had a short story called "The Red-Headed League," which introduced me to Sherlock Holmes, and I went on to read all the Holmes adventures.

I was a Dell comics fan, and bought many titles, including Tarzan, The Lone Ranger, and most of the Disneys. Learned a lot of science and economics from Donald Duck stories.

Went to Tarzan movies whenever they came out. 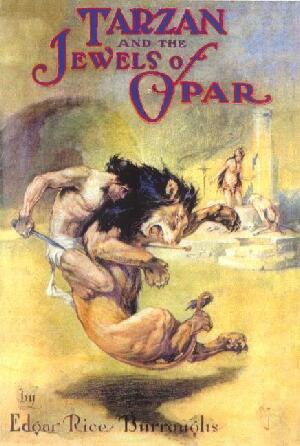 Didn't know much about Tarzan books until I found that the library had two, one of which was "Tarzan and the Jewels of Opar." I tried reading it, but it confused me since it didn't seem to be much like the movie Tarzans. Didn't understand the stuff about following spoors, etc. Didn't finish the book.

Learned about Mad with issue No. 40. Went Mad, and bought a lot of the imitations, too.

Got into reading Tarzan finally when all the Ace and Ballantine paperbacks started coming out. At that time, other publishers were jumping on the bandwagon by bringing out a lot of Wells and Verne paperbacks, so I started building my own library about then, rather than depending on the one in the middle of the city park.

Never really read any of the outer space science fiction. A friend was reading "Stranger in a Strange Land" once and was reading aloud to me a "neat part" about the Martian's body falling apart as people pelted him with rocks or something. Checked it out and started reading it. Lost interest. I thought Heinlein's concept of a certified "witness," however, was interesting.

Once I started building my own book collection, I pretty much gave up on libraries. If I want to read a book, I buy it. It's more convenient; you don't have to worry about taking it back, getting your name on a waiting list, finding a parking spot, all that stuff. Only problem with this: I have too many books and it just about kills me to get rid of ANY of them, although, of necessity, I DO now and then.