Few scholars have delved as deeply into the origins of hominid and anthropoid evolution as John "Bridge" Martin. Mr. Martin brings, in this important article, a series of new revelations regarding early primate to human evolution and the social interactions that explain much in how today's human society (as of 2020) works. Understanding how we "got here" is essential to understanding "where do we go from here?"

THE INFLUENCE OF
AUSTRALOPITHECUS
ON TARZAN'S WORLD

Way back when the world was young, conditions were different than they are now, and turf was commonly found in African rain forests. It did not form there naturally, but was actually cultivated as such by tribes of hominids known as Australopithecus, which generally ranged over Eastern Africa.

And, you guess it, Australopithecus was the ancestor of those who came to be known as the Mangani.

The Australopithecus family was quite advanced, in spite of resembling a bunch of hair-covered human beings with advanced arthritis or, as they said back then, Australoritis.

The Australopithecus people drew the first part of their name from the continent of Australia, which was once attached to the Eastern side of Africa, just as South America was once attached to the western side. Both continents eventually broke loose and floated away, Australia stopping in the Pacific Ocean when it became stuck against a reef barrier, and South America floating west until it was grabbed and stopped, by the skin of its teeth, with the tail of Central America.

The Australopithecus loved their African playground and would lope across the Savannah in search of the delectable African ants. These insectoids eventually evolved into antelope, the "lope" section of their name, which describes their method of ambulation, 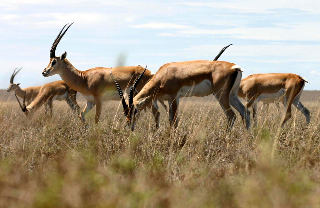 coming from the loping Australopithecus who used to love the game of chase so much. They made lassoes by weaving grasses together and used them in their game called "rope a 'lope."

This craft was passed down to descendants who eventually became the Mangani, and though the Apes of Kerchak had long forgotten the skill, Tarzan's association with their "environment" enabled him to discern and pick up that art, which has been useful to him throughout his career.

To keep their eyes from being damaged by the blazing African sun, the Australopithecus designed and manufactured special headgear, known as "pith" helmets.

In honor of this essential attire, still in use on the dark continent today, the word "pith" was added to the Australopithecus name.

When they evolved into further civilized beings, the Australopithecus became fatter and lazier and needed something else to do besides chase antelope, and so invented the game of golf,* which was responsible for the suffix "-cus" being added to their name, to describe the reaction most of them would have when they would hook or slice the ball.

* The origins of golf are shrouded in mystery, though "modern history" indicates that the first game of golf with a stick and a leather ball played over several hundred yards was first done in 1261 A.D. Bridge's new research indicates that Australopithecus played the game some 40,000 years earlier!

To play this game of golf, the Australopithecus used the regular jungle, which formed the first "roughs." Thus, golf back then was far more challenging than it is now, since there were no fairways, just the roughs and greens. They developed the well-manicured turf areas to serve as putting greens.

It was such a former putting green that the Mangani of Tarzan's day used for a Dum-Dum arena, and one will recall that the apes never walked to the arena as the surrounding forest was too thick, but rather dropped into it from overhanging branches of aboreal giants (known in former times as Australo giants). This will give you some idea of just how rough the roughs were when the Australopithecus waded their way through them, trying to drive straight their golf balls, which were made of petrified Ostrich eggs.

The clubs themselves came from ordinary tree branches and the rules of golf permitted players to use whatever shape and size of club they found, as long as it came from a dead tree, and not a living Australo giant. The modern-day Mangani found many of these clubs wrapped around trees by the Australopithecus when the game of golf became too frustrating for them to play. The Mangani then used these for drumsticks, utilized by the she apes to pound out the dance rhythm on the huge earthen drums found at each turf site. 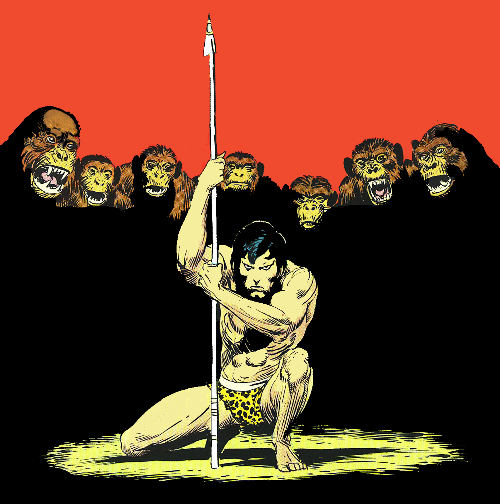 As for the earthen drums, these were originally earthen dams, made by the Australopithecus to divert streams so the water would not overrun the putting greens but would still be handy for irrigation. The streams also served as water hazards.

Eventually, the Australopithecus developed an artificial type of ground cover which was much stronger and did not require irrigation. This was known as Austraturf. The streams were then diverted, with no need of approval from environmental agencies (which had not yet evolved), and after the last of the water flowed away, the dams were left hollow and were converted, by the Mangani, to the drums of Tarzan's day.

There is much more that can be learned about the amazing Australopithecus. This has been only a short summary. For a more thorough discussion of this important species, please see the wickedtunapedia website.