Of all the fictional worlds Edgar Rice Burroughs (1875-1950) created, his western novels were the most realistic. Why? He lived them! As a youth, with his brothers, he worked a gold operation and a ranch in Idaho. He had a short military career with the Seventh Cavalry at Fort Grant, Arizona (circa 1896), and even met a local real life "shady" character named "Texas Pete."

Mr. Martin presents insights into ERB's The Bandit of Hell's Bend from an interesting perspective via one of the novel's lesser characters, a Chinese cook named Wong.

The Yin and Yang of
The Bandit of Hell's Bend

Wong, the Chinese cook in Edgar Rice Burroughs's The Bandit of Hell's Bend, was likely conversant with ancient Chinese philosophy and, though he isn't mentioned much in the 1924 Western, may have been an interested observer in the behavior patterns of the story's three leading men, particularly with regard to the Yin and the Yang.

In Chinese philosophical and spiritual beliefs, "Yin" is the name for traits that are negative and on the dark side. "Yang" refers to the positive and bright side. The former is "feminine" and the latter is "masculine."

The words come from the Chinese terms for the shady and sunny sides of a valley but came to symbolize the character traits as well, just as even our English words of "shady" and "sunny" can refer to one's character or disposition.

It is considered healthy to have a little bit of both characteristics in one's personality and, in that regard, the three suitors of rancher Diana Henders certainly exhibit both, although the "Yang" dominates in only one of them.

In the world of ERB's creations, his villains and heroes are usually black and white, with few shades of grey. So The Bandit of Hell's Bend is an exception in his writiing.

The first one we meet is Bull, the foreman of Elias Henders's ranch. Since a mother would be unlikely to name her child Bull, we suspect it's not his given name, but a nickname. And throughout the book we never learn his real first name, nor do we learn his last name. He is just Bull -- strong, overpowering, but sometimes a bit rambunctuous, like the proverbial "bull in a China shop."

There is nothing about him, though, that suggests the kind of "bull" that refers to the euphemism for lying, related to the waste product of the animal known as a bull.

But Bull is certainly a flawed individual. The reader's first look at him shows he lacks the common sense to stay away from hard liquor, which past experience ought to tell him could lead to him doing some stupid things and even losing his job. That's exactly what happens, and, after drunken actions in town, he is fired as foreman of the Bar Y Ranch and forced to take a job as a regular cowhand under newcomer Hal Colby, the second of the three protagonists.

The reader notices right away that Colby, too, is flawed. Although he is presented as a friend of Bull and someone willing to share, it is obvious right away that he knows that sharing liquor is going to lead to trouble for Bull. When that happens, Colby reaps a reward by accepting a promotion to foreman and now being able to boss around his former boss, though the two men still claim to have a friendship. 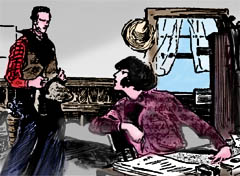 But Colby has his good side as well. He is a gentleman with Diana Henders, the daughter of the ranch owner, and sems to have her best interests at heart. She reacts favorably to his solicitous efforts, but she also looks upon Bull positively, despite his defects.

Colby is seen at his best in Chapter VI, "The Renegades," when Apaches attack Elias and Diana. Colby, who is a short distance away, with Wainright, the third man in the trio of leading men, immediately rides to the rescue. Diana watches him coming and thinks: "How magnificent he was! He had drawn one of his six-guns and was riding, not for the hill, but straight for the Indians, and just as he passed out of her sight behind the hillock he opened fire."

This is a moment of seeming true selflessness and self-sacrifice. He was risking his life and there was no guarantee that he would prevail in driving off the Apaches. 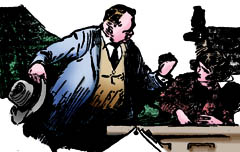 The occasion brought out the worst in Wainright. Up until that time he had seemed to be a good man, entertaining in conversation and charming to Diana. Yes, it was true that his father was putting pressure on the senior Henders to sell the ranch, but the younger Wainright seemed to have more innocence in the matter.

Diana at first found Wainright to have a certain attractiveness. "He was the first educated man near her own age that she had ever met and his conversation and his ways, so different from those of the rough vaqueros of her little world, made a profound impression upon her....Those first two hours with him thrilled her with excitement...."

Like Bull and Colby, Jefferson Wainright had shown an interest in claiming the hand of Diana Henders in marriage, even promising: "There is no sacrifice that I would not willingly and gladly make for you or yours. I would die for you, dear girl, and thank God for the chance!"

Yet, when the Apaches attack and Colby rides to the rescue, Wainright rides, too, as far away as he can get! Charitably, the others like to think he had merely gone for help. However, that is never established. 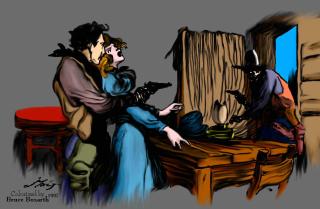 Later in the book, on another occasion when Wainright again pledges his willingness to give his life for Diana, he once again almost immediately has occasion to show his words were ill-timed.

Meanwhile, Bull is not left out of the dramatics of the Apache attack. He and pal Texas Pete* come along and helped drive the murderous renegades away.

Bull generally reflects a good, solid character throughout the book, traits that one would expect of a cowboy hero. But he is also under a cloud of suspicion much of the time, as several people suspect him of being the mysterious bandit who holds up stagecoaches at Hell's Bend, and Bull doesn't really do much to speak up for himself.

This was the "old west," and men tended to have rough edges. Some had a lot more than others.

Burroughs, with experience among real cowboys on a ranch in Idaho when he was in his late teens, no doubt enjoyed writing this and letting the men's characters play out to their inevitable conclusions, when one would either emerge to kiss the girl or perhaps ride off into the sunset.

Wong, the observer, might see it this way: Which one's Yang will triumph over his Yin, and, in a Wild West yarn, that will probably be the one whose six-shooter has the Bang to go with his Yang.

* Texas Pete, Bull's best friend. To see what MIGHT have happened to Texas Pete see: Life After the Gun.