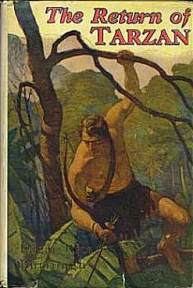 The Incompetent Villain of "Return"

Originally appeared at ERB-LIST, May 14, 2008 — A follow up on Bridge's Analysis of Return of Tarzan

To Nikolas Rokoff, arch villain of two Tarzan novels, we owe a small debt of gratitude. For if the fiend described by the Count de Coude as the man with the "malignant brain" had not upended Tarzan over the rail of an ocean liner off the coast of Africa one evening, we could well have ended up with a library of books about "Tarzan of the Sahara" instead of "Tarzan, Lord of the Jungle."

Tarzan had come to a decision. Born in the jungle and raised in a tribe of apes, he had at last come to know the society of men like himself and had tasted of the finest -- or, the worst, depending on one's point of view -- that civilization had to offer.

And he found that civilization left a lot to be desired.

"Mon Dieu!" he soliloquized, "but they are all alike. Cheating, murdering, lying, fighting, and all for things that the beasts of the jungle would not deign to possess -- money to purchase the effeminate pleasures of weaklings. And yet withal bound down by silly customs that make them slaves to their unhappy lot while firm in the belief that they be the lords of creation enjoying the only real pleasures of existence. In the jungle one would scarcely stand supinely aside while another took his mate. It is a silly world, and Tarzan of the Apes was a fool to renounce the freedom and the happiness of the jungle to come into it."

Thoughts of returning to his beloved jungle filled his head, but his developing friendship with Olga de Coude began to lull him:

"Tarzan was nearer to contentment than he had been since the peace and tranquility of his jungle had been broken in upon....He enjoyed the pleasant social intercourse with Olga's friends, while the friendship which had sprung up between the fair countess and himself was a source of never-ending delight. It broke in upon and dispersed his gloomy thoughts and served as a balm to his lacerated heart."

"...I shall go back to my own jungle, and lead the life that God intended that I should lead when He put me there."

And so, Tarzan returned to Africa. Not the Africa of his youth, as it turned out, but to the scorching sands of the Sahara in Northern Africa.

Why there? Because he had found a job that seemed to be to his liking, as a special agent for the French ministry of War. It combined his desire to return to Africa with a job that promised excitement and adventure. As he told his friend Paul D'Arnot, "I am a little child. I have a new toy, and I am tickled to death."

And there, in that Northern Saharan Desert, the ape-man may have spent the rest of his life. For he found there not only adventure, but the companionship he craved:

"During these two days Tarzan had spent practically all his time with Kadour ben Saden and his daughter. He was keenly interested in this race of stern and dignified warriors, and embraced the opportunity which their friendship offered to learn what he could of their lives and customs....Here were the people after his own heart! Their wild, rough lives, filled with danger and hardship, appealed to this half-savage man as nothing had appealed to him in the midst of the effeminate civilization of the great cities he had visited. Here was a life that excelled even that of the jungle, for here he might have the society of men -- real men whom he could honor and respect, and yet be near to the wild nature that he loved. In his head revolved an idea that when he had completed his mission he would resign and return to live for the remainer of his life with the tribe of Kadour ben Saden."

And so it might have been, had not Tarzan received new orders prior to the official completion of that mission, orders which put him aboard a ship bound for Cape Town, aboard a ship on which Nikolas Rokoff and his vicious valet Alexis Paulvitch had also booked passage.

And then one night they sneaked up behind the Lord of the Jungle and pushed him into the sea.

And so, through his own strength and stamina, a little bit of luck, and a shove in the right direction from the villain of the piece, Tarzan not only made it back to the African jungle, but back to the very shores upon which cruel fate had first cast his parents so many years before.

Tarzan then goes on to star in one of his greatest adventures, where he becomes the chief of the fierce Waziri tribe, resumes the leadership of his old band of apes, discovers, escapes from and raids the lost city of Opar and, in the end, wins the girl of his dreams after all.

That Nikolas Rokoff was to die one book later beneath the fangs of Sheeta the panther was, of course, his own fault.

Tarzan was willing to leave well enough alone; Rokoff should have done so also. Had he pursued his criminal career without going out of his way to pick trouble with the ape-man, he could perhaps have had a somewhat happier and longer life, though in the end I believe that fate would have brought him to justice another way.

Rokoff was good at only one thing -- fooling people. He fooled Hazel Strong and her entourage into believing he was kind, considerate, faithful. Rokoff even fooled Tarzan! Tarzan, after all, had confronted Rokoff at least two or three times on a previous ocean trip, had forced the man to sign a confession to his crimes in Paris, had spent a few moments in the villain's power in an Arab tent, and later almost choked Rokoff to death.

You'd think that after all that, Tarzan would be able to recognize Rokoff on the ship trip, if by no other way than by his smell!

It is only his notice of Rokoff's injured hand that madesthe light go on and allowed Tarzan to recognize him at last.

Yes, Rokoff is good at fooling people. But he's rather poor at everything else. And he's particularly poor when it comes to killing Tarzan. There are several people in this book who have an opportunity to lay the ape-man low for good, and a few lions take a stab at it as well. But none fails so frequently and frustratingly as Nikolas Rokoff.

In chapter two we read:

"Rokoff...had at last succeeded in drawing the revolver. He had stopped, and now he deliberately raised it to Tarzan's breast and pulled the trigger. The hammer fell with a futile click on an empty chamber...."

Thwarted, Rokoff tries again in chapter three, this time hiring a band of thugs to do his murder for him. Here we read of more narrow escapes from death by the ape-man, one from the mighty swing of a bludgeon "that would have crushed Tarzan's head had it ever descended upon it." Another perfect opportunity for someone to kill Tarzan came when the police joined the fight and one drew "his revolver and, from where he lay on the floor, fired at Tarzan. The shot missed...."

By now, Rokoff's motto could well be, "Curses! Foiled again!" But he is nothing if not persistent. He engineers a plot in which Count de Coude surprises Tarzan and Olga in a moment of reckless passion and the inevitable duel for the sake of honor is demanded. De Coude is described as a "splendid shot" and "the best marksman in France."

Yet, when an unruffled Tarzan coolly puffs a cigarette while allowing de Coude free shots at him, rhe best the surprised count can do is wound Tarzan twice and miss him once.

But the miscreant will not give in. He plots with Arabs in Northern Africa to murder Tarzan and, when that doesn't work, he finds his own chance when Tarzan, apparently the victim of dulled jungle instincts, gazes lazily over the rail of the ship and allows Rokoff and Paulvitch to sneak up behind him and send him overboard.

Flushed with apparent victory at last, Rokoff goes on to new fields of endeavor, namely courting Hazel Strong under the false name of Monsier Thuran.

True colors come forth under stress and Rokoff's real characteristics come through after a shipwreck when he shares a lifeboat with Jane Porter, Hazel's friend and Tarzan's lost love.

Yet, fate is kind to Rokoff and gives him yet one more chance to kill the man he thought he had already killed.

When nearly all the parties in the book are reunited at the boyhood cabin of Tarzan of the Apes, Rokoff, returning from a hunting foray with Lord Tennington, is given that other try:

"...before Tennington realized what he intended he had thrown his gun to his shoulder, and aiming point-blank at Tarzan pulled the trigger."

Is this it, then? Does Rokoff win at last? No, read on:

"But the Englishman was close to him -- so close that his hand reached the leveled barrel a fraction of a second before the hammer fell upon the cartridge, and the bullet that was intended for Tarzan's heart whirred harmlessly above his head."

And so, as Rokoff goes into the hands of the authorities, it's all over as far as "The Return of Tarzan" is concerned. Perhaps, with some time in prison to think things over, Rokoff will devise a better plan for dealing with Tarzan. And we know from "The Beasts of Tarzan" that Rokoff does indeed develop a better plan.

But in the case of Tarzan, is "better" good enough?