Who's Who in Leopard Men saga? 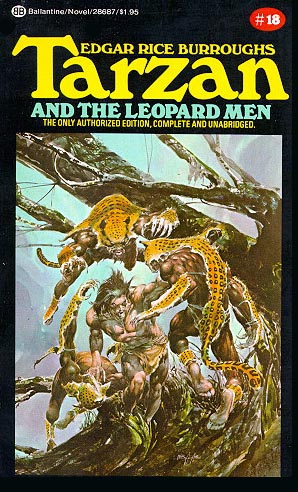 A man who spends his life roaming through jungles filled with dangerous animals and dangerous men, and encountering and engaging same in the process of living out various adventures -- such a man is liable to get an occasional wound from an animal claw, native spear or arrow, bullet from a hunter's gun, or even a blow from the caprices of nature.

Such it is indeed with Tarzan of the Apes in Edgar Rice Burroughs' 1935 Tarzan novel—"Tarzan and the Leopard Men."

This time the wound comes in the form of a whack on the head, administered by a falling tree limb in the midst of a howling African storm.

And thus begins a Tarzan story in which the Lord of the Jungle awakens with a case of amnesia, an affliction which he suffered several times during his career and which always, somehow, made his adventures more exciting as he would overcome that handicap along with other perils in his never-ending battle for truth, justice, and the African way.

But if the strong King of the Apes can suffer amnesia by a trifling tree limb blow, aren't we—the pampered products of what ERB called "the fetid breath of civilization"—even more susceptible to the dangers of forgetfulness from a chance rap on the noggin?

And so, for the sake of this book, review, imagine for a moment that you had suffered a case of amnesia and, in the process of trying to regain your memory, you picked up a book called "Tarzan and the Leopard Men" and decided to read it to see if it would give you a clue.

You would begin reading this book, not—of course—knowing who or what Tarzan was. And, interestingly enough, you would not immediately find out what the word Tarzan in the title meant -- not in the first chapter, nor the second, nor the third, nor the next several, until you had read almost halfway through the book. Then, and only then, is the name Tarzan applied to any of the characters in the book.

You would meet, instead, in those opening chapters, a cast of charactes who all went by aliases, or who had secret identities of one kind or another.

There is a man who hangs out with a small monkey who is injured in the opening chapter. He is a central figure in the book, but for a long time we know him only as Muzimo, and his monkey is referred to as the Spirit of Nyamwegi. These names are bestowed upon them by a superstitious native who believes the pair to be representatives of the spirit world, come to visit men.

There are others who go under aliases, too.

—A beautiful young girl who prefers to be known only as Kali Bwana.

—A grizzled ivory hunter whose moniker is just Old Timer.

—His younger companion who is called, simply, The Kid.

As one reads on, it becomes obvious that there are others who, at times, conceal their identities. In fact, the feared Leopard Men, from whom the book draws part of its title, are a group of men forming a society whose very hallmark is secrecy.

This is not a secret society like modern ones, to which men often aspire to belong in order to find fellowship, brotherhood, or a rise in social status. This is a secret society of people who meet to do evil. They do not inspire hero worship in non-members, but rather fear and revulsion.

ERB describes them this way: "The order of Leopard Men is a secret order. There are few villages and no entire tribes composed wholly of Leopard Men, who are looked upon with disgust and horror by all who are not members of the feared order. Their rites and practices are viewed with contempt by even the most degraded of tribes, and to be proved a Leopard Man is equivalent to the passing of a sentence of exile or death in practically any community."

In his Burroughs Dictionary, George McWhorter tells us the Leopard Men "...practice cannibalistic rites. They must kill their victims with leopards' talons (improvised steel claws) in order to satisfy the purposes of their religion...so they normally carry no other weapons."

This is a fun book to read. It is fun trying to guess the true identities of the various characters and to speculate on the reasons for their inclusions in this adventure. Could it be that somehow their destinies are intertwined, and if so, how? If they all manage to survive the various dangers that face them throughout the book, will there be revelations at the end of the story which tie some of the seemingly loose plot threads together?

Well, of course! If there were not such things, this story would probably never have been written. ERB did not chronicle everything that ever happened to Tarzan and the people with whom he came in contact. Rather, he just wrote books about the adventures which did contain incredible events and coincidences, the kind that make a story exciting and worth reading.

It had been awhile since my first reading of "Leopard Men," so when I read it for the second time, I had forgotten most everything about the plot.

So, I made guesses along the way as to what or who some of the characters were going to turn out to be. And...you know...I was wrong about some of my guesses. Yes, old ERB, called predictable by some, managed to fool me on a few things, which only made my enjoyment of the old master's storytelling ability all the greater.

If you haven't read "Leopard Men" in a while, or ever, pick it up for a rousing good Tarzan story.