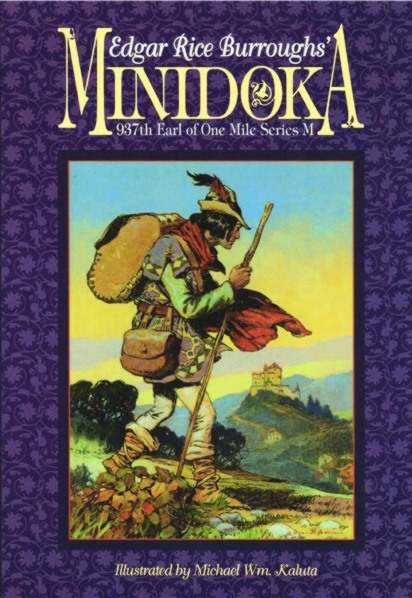 Minidoka, 937th Earl of One Mile Series M languished in the company safe of Edgar Rice Burroughs, Inc. until "discovered" in 1955. A charming mix of fairy tale and allegory, Minidoka is perhaps the earliest Burroughs tale ever committed to manuscript form. The actual date when this fanciful tale was created is unknown, but is believed to be sometime between 1904-1910. Fans of this American Author, credited as being the "Grandfather of Science Fiction", have long enjoyed the absurdities—and hints at greatness to come. The final publication came complete with stunning art.

*Footnotes are included in-line (after each paragraph with a footnote). 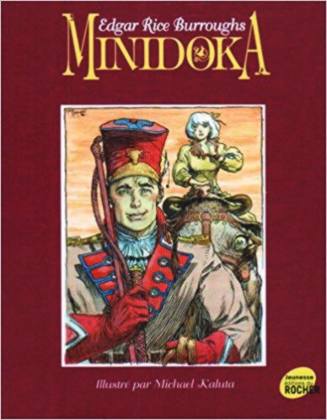 Beneath the photo of a young Edgar Rice Burroughs opposite the title page, we are admonished that "This book is meant to be read aloud."

When I first got my copy of this book, I took the instruction seriously and began to read the story aloud from the place where it begins on page 11 to the end of the first sentence, where I encountered the word "Pzvrtjhk."

All right. Mr. Burroughs had had his little joke, the first of many such little jokes he put into a tale which he very likely never expected to be printed for public consumption.*

*Burroughs, in fact, kept the Minidoka manuscript in the company safe. However, the title did appear on ERB, Inc letterheads after the safe was "opened" in the 1960s. I know, I have three company letters from the 1980s! —Editor.

Minidoka, 937th Earl of One Mile, Series M, subtitled "A Historical Fairy Tale," is a delight for the Burroughs fan. I doubt, though, that Minidoka will ever be much of a delight for the public at large. I don't expect to see it showing up in either children's or adult sections of book stores, nor have I ever seen a review in a newspapers' art or literary section.

Minidoka is a "family book" to be read and appreciated only by a circle of family members, or a family of friends and fans, who have a love for the author and who can appreciate, to greater or lesser extents, the style of humor, writing and inside jokes which make up this unusual tale.

Minidoka weighs in at 12,125 words, including titles. There are no chapter breaks. This story, complete, constitutes the longest "chapter" ever written by Edgar Rice Burroughs. Only the Caspak novels chapters (the longest in any Burroughs novels) come close in word count, and they aren't even that close!

I suspect there are far more such inside jokes in this volume than will ever be discovered by even the most careful Burroughs researchers.

Did Burroughs' circle of friends, for instance, include people with the last names of Brady, Conner, O'Hara, O'Malley and others, names that he borrowed with a smile as he penned Minidoka?*

*The ERBmania! editor suspects that many of the names were also nods and winks at Chicago, or local Idaho politicians and law enforcement of the period (circa 1888-1910).

Some of the inside jokes are revealed by Robert R. Barrett in his introduction to this book.

Here's some of my thoughts on Burroughs' references and inside jokes:

First and most obvious is the name "Minidoka"* itself. It is the name both of a very small town and of the Southern Idaho county in which that town is located.

*Minidoka is of Dakota Sioux origin meaning "a fountain or spring of water." Minidoka was the name of the Union Pacific Oregon Short Line rail spur (1883). The town of Minidoka grew up around the rail water stop. Minidoka Dam (1904, completed 1909) was a reclamation project under President Theodore Roosevelt.

Idaho was an early day stomping ground for the man who would someday write the world famous classic, Tarzan of the Apes. He served as a young cowboy on a cattle ranch in the Raft River area at the age of 16, later as part of the Burroughs family gold-dredging operation on the Snake River, and also as a storekeeper in Pocatello and a city councilman in Parma.*

I had a chance to drive through this area while on vacation back in 1992.

The Raft River itself is no more, reduced to merely a weed-infested trickle due to a dam built for irrigation purposes further up the valley. Raft River is prominently mentioned in "Minidoka" as is "Yale," which is represented by Yale Road which cuts through part of the Raft River area today.

The largest city in Minidoka County is Rupert, population 5,500 a few years ago, and it is the home of the Minidoka County Museum, which includes exhibits of photos showing the Burroughs' dredging operation along with related historical displays. Minidoka is just a few miles north of Rupert and is basically houses and a post office today.**

* Minidoka County was created by the Idaho legislature in 1913.

During World War II, long after Burroughs' sojourn in that area, the name Minidoka was used for a location near Eden, Idaho, around 40 miles west of Minidoka, for a World War II Japanese interment camp. That camp had been believed, by some, to have been near Minidoka itself, but was actually north of the Jerome County community, and not in Minidoka County at all. The government may have used the name Minidoka for the camp to avoid confusion with the Jerome War Relocation Center in Jerome, Arkansas. The Minidoka interment site in Idaho is a national historic site today.

Burroughs also mentions the Connerdom of Cassia, an obvious reference to Cassia County, which is to the south and separated from Minidoka County by the Snake River. A museum in the Cassia County city of Burley features the anchor from the Burroughs' houseboat* which floated on the Snake River, along with some old Burroughs books and a copy of The Declo Independent, an old newspaper from the nearby town of Declo, which serialized "Tarzan and the Jewels of Opar."

* The houseboat was built to follow the Burroughs gold-dredging operations to bring the Burroughs families together. Previously the families had lived in Pocatello. Porges, cxxxvii

On page 63 of "Minidoka," Burroughs mentions the Oregon Trail. One of Cassia County's claims to fame, as featured in the museum at Burley, is the fact that five different pioneer trails, including the Oregon Trail, passed through its borders at various times.

Burroughs had flying monkeys. In literature, L. Frank Baum (Wizard of Oz) introduced flying monkeys in 1900. Did ERB pre-date Baum, or did he merely borrow?

Or, more generously, was it spontaneous inspiration?

Burroughs' Minidoka manuscript was undated, but Barrett believes it was written in the 1900-1904 period of Burroughs' life. This would have been well after his service in the Seventh Cavalry and means there may have been some literal truth to the "old cavalry trick" Burroughs describes on page 17, although one will have to use one's own imagination to decide where the cavalry trick ends and Burroughs' imagination begins.

Along the way, I appreciated Burroughs' coinage of words such as "howsomever" and the phrase "pulmonic solidification," whatever that may mean.* And where did the proverb on page 16 come from: "...it is the high head that seeth not the coal hole"—Burroughs' wit or some other source?

*pulomnic refers to the large artery leaving the heart and solidification, medically, means spaces (lungs) filling with fluids due to illness or aspiration of liquids. As used in Minidoka one can only assume ERB was too enthralled with the Thesaurus.

I particularly enjoyed the statement on page 24 that "...Minidoka eschewed, and, picking up a copy of Browning, was soon asleep."

On page 24, Brady tells the Royal Keeper of the Cheese Knife to cut something other than cheese and here Burroughs may have been expressing an opinion about royal titles. Real titles, I've found, are just as cumbersome and mysterious to some. In the Oct. 16, 1998, edition of the Tacoma News Tribune was an article stating that the Queen of England has decided to do without the Bluemantel Pursuviant and the Silver Stick in Waiting the next time she visits the House of Lords. Who needs them anyway, when she has the Gentleman Usher to the Sword of State, the Rouge Crois Pursuviant and the Gentleman Usher of the Black Rod, the article infers.

When the Prime Minister is led to his fate on page 25, the Brady calls out, "Good day, sir. Give my regards to Joseph Smith."

Mr. Smith, of course, founded the Mormon Church, which was then and continues today to be a strong presence in Southern Idaho, being just north of Utah.

And why does Burroughs, on page 40, write of a "thousand beautiful black and white sable Collie dogs" if not out of regard for his own love for Collies,* his Collie Raja being the inspiration for David Innes's pet in Pellucidar. 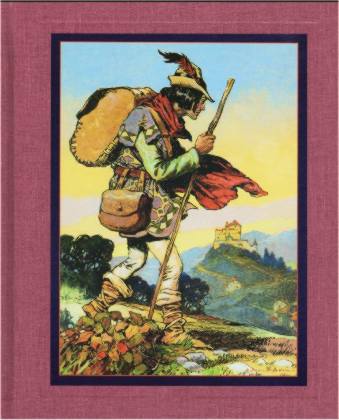 Cover to the Slipcase Edition of Minidoka, Dark Horse, 1998

The book, published in 1998, originally came in two editions. The $14.95 edition is nice enough, featuring full-color art of J. Allen St. John on the cover. On the $75 limited edition, the art is much larger and four-color plates are inside.

The cover of "Minidoka" features the J. Allen St. John mixed media illustration which was done years ago for no particular book but which seems to fit this one. ERB fan NelsMyrhoj once adequately described the character in the illustration as "that elf-lookin' guy."

* James Allen St John died in 1957, long before Minidoka was ever considered for publication. The image was one of the few unpublished St John works.

And Burroughs himself is an illustrator of this book, the introduction featuring several Burroughs drawings he made in the era he wrote Minidoka..

"Minikoka" is copyright by Edgar Rice Burroughs, and also by Dark Horse Comics, inc., Milwaukie, Oregon. There is a French edition of the book and there is also reported to be an edition published in New Zealand by Penguin Books.

A review of Minidoka at the Dark Horse website is here: