Requiem For A Second Banana

John Lafitte is the main character in "Pirate Blood" – but he is not the hero.

There is no hero in this story, except possibly Frank Adams, who was the hero of the hometown football team at the start of this novelette.

But this is not supposed to be a tale of heroes, winners, or people of high community and moral standards, but rather the story of a second banana football player who becomes a second banana pirate.

The story, written in 1932, was also something of an experiment.

The writer, Edgar Rice Burroughs, was already the famous author of a stable of fine heroic stories of adventure set in exotic locales such as Africa, the Inner World, and the unearthly worlds of the moon, Mars and, soon, Venus, and several other worlds in between, some real and some of his own invention.

Reportedly, Burroughs wanted to find out if he could write a different type of story and sell it under an assumed name.

The story was rejected, and Burroughs set it on the shelf, the experiment over.

He felt he had to depart from his successful heroic formula when he wrote and submitted this yarn under the nom de plume of John Tyler McCulloch. Otherwise, potential editors may have just as easily rejected it for another reason: passing McCulloch off as "just another ERB imitator."

Even decades later, when the story was finally published as part of the Burroughs boom of the 60s and 70s, it was still "rejected," in a sense, by being printed in the secondary portion of a paperback book which featured, as its marquee title, "The Wizard of Venus" (Ace). One had to read the smaller print on the cover to even know that the back section of the book contained another story: "Pirate Blood."

It has never been the lead or sole story in any U. S. hard or softcover publication, and, as a result, never had a published cover painting*, or even any interior illustrations, for that matter.

The story is about blood – not the type of blood shed at the point of pirate’s swords (although there is plenty of that) – but blood in the sense of heredity.

ERB liked to use some of his stories for exploring the realms of one’s blood line (heredity) vs. environment.

His Tarzan inherited and displayed the noble characteristics of an English lord, despite being reared in the jungle by a band of wild apes. Noble blood triumphed.

Tarzan’s son, Korak, though, inherited his father’s aptitude for jungle skills, despite being raised in the environs of a civilized English estate. The blood of the primal man dominated.

There is at least one Burroughs hero who can compare to John Lafitte in the scalawag department. That true hero is Billy Byrne, the title character of "The Mucker," who could be as big a baddie as John Lafitte, but with a marked difference: Byrne started out as a brute, a product of his environment, but, sparked by the attention of a woman, turned into a genuine good guy, who made up for the bad he had done. Lafitte, by contrast, started out with every advantage: A good town to grow up in, athletic abilities, popularity, and a steady job as a policeman, charged with enforcing the law. Yet, at the first opportunity, he changed sides, becoming a criminal pirate who shed innocent blood and thought nothing of it.

One might excuse Lafitte for his initial willingness to become a pirate. Caught by a band of cutthroats when he parachuted onto their island from a damaged blimp. Lafitte’s eagerness to join the band of pirates was probably the only thing that saved his life – at that time.

However, with the pirate captain, The Vulture, lying ill, Lafitte makes a life-changing decision. When the other pirates report a motorized schooner has put into the island’s small harbor, he seizes the opportunity to take five men and commandeer the ship.

As the attackers board the vessel, they are outnumbered in people, but not in weapons and so, the superior weaponry prevailed. But, with one of the five pirates already shot dead by a yachtsman, Lafitte could have turned with his own weapon and quickly killed a couple of his fellow pirates, thus giving those aboard the ship the opportunity to join him in turning things around. He could have started an action that might have resulted in the pirates being defeated, and thus won his way back to civilization and his police officer’s job.

However, then we would not have had much of a story!

As it is, even though this is fiction, it is unsettling to read of these 12 yachtsmen and their crew who were so summarily and thoughtlessly executed and disposed of. It does, however, give a good picture of what being a pirate really means!

Lafitte, having earned the right to be second banana to The Vulture, participates in other raids where murder, likewise, is committed. 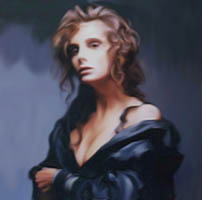 Eventually, due to Lafitte’s interest in the affection of The Vulture’s woman, known as La Diablesa, he falls out of favor and is about to be killed when he seizes an opportune moment to abdicate to a rival band of pirates, commanded by a brigand known as the Portuguese. Before long, Lafitte earns his way to second banana status there, as well. He betrays his former crew (no honor among thieves), leading the Portuguese and his men to a successful surprise attack on The Vulture’s island compound,

The Portuguese is killed by one of his own men, leaving Lafitte to become, at last, the top banana. But we do not get to read of his exploits as such, for the story comes to a quick end after that. We learn that he winds up in Paris with La Diablesa as his wife. And, as a married man, he no doubt reverts to second banana status once more!!

The story wasn’t only about the blood-line of Lafitte the pirate (descended from pirate Jean Lafitte) , but also the blood of Lafitte’s "girl of his dreams," the hometown beauty named Daisy Juke whom he never had the courage to ask for a date. Her ancestor was said to be the notorious real-life ne’er-do-well Max Juke. Through various circumstances, Daisy also ends up in a position to be captured by the Portuguese’s pirate band, and comes to an ignominious end.

The first half of "Pirate Blood" is too long; the second half is too short. Yes, it is true that ERB had to come up with a plausible way of getting John Lafitte from Southern California to a pirate island thousands of miles across the Pacific, but why did that ill-fated balloon ride have to take five chapters? Three would have been more than enough. Two would have been better. Or, perhaps ERB should have sent him on a shorter ride to the east, where he could have ended up as a Pirate of the Caribbean like his infamous ancestor!

Still, there were some edge-of-seat moments that showed up in those chapters, particularly the part that had Lafitte barely hanging on, leaning out of the gondola, undoing stubborn bolts to try to drop the useless motor so the overburdened airship would rise.

In Chapter 9, Lafitte says: "Since joining the police force I had perfected my work with the revolver until I could shoot in such company as that of Davis of the Los Angeles Police Department and not feel ashamed of myself." Burroughs admired James E. Davis, who served as chief of the L.A. force twice (1926-1931 and 1933-1939), so no doubt Lafitte’s mention of Davis is intended as a reference to this man. Burroughs spoke well of Davis in an article he wrote for a 1929 edition of the Police Gazette (see Bill Hillman’s erbzine.com). The L.A.P.D. had been plagued by corruption (with people like Lafitte in it, no wonder!). But Davis was a reformer. Wikipedia.com says: "In his first term he fired almost a fifth of the force for bad conduct, and instituted extended fire arms training and also the dragnet system. In his second term Davis instituted a ‘Red Squad’ to attack Communists and their offices."

An internet search of the term shows that "diablesa" means demon, or devil, although sometimes it can refer to a witch.

As usual, ERB sprinkles his stories with clever bits of writing. Some examples:

"I thought I would swear; but as there was no one to hear me it didn’t seem worth the effort. It is remarkable how many of our reactions depend upon an audience." – Chapter 6, while dealing with the foundering balloon.

"Her figure was divine. The combination may best be described as body by Fisher, bearings by Timkin." – Chapter 8, a description of La Diablesa.

"I have killed men, but I have never sent their widows large bills for my operations. I have robbed people of their all, but I have mercifully put them out of their misery that they might not live to bemoan their losses or suffer the deprivations and reproaches of poverty. In my own way I too am a philanthrophist and a benefactor of the human race." – Chapter 10, a sardonic putdown of worldy do-gooders in an attempt to justify one’s wrongful actions.

"The test of true friendship is the secret sacrifice that one would make for a friend, where no reciprocation nor any applause were possible." –Chapter 13, while musing on the company he keeps.