This article is about 50 years in the making but since the subject of the Whitman editions came up on Facebook, in the fun an informative group, "For the Love of All Things Edgar Rice Burroughs", I did a quick comparison this morning and posted the following: 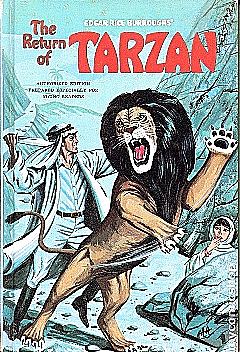 A thread elsewhere in this group discusses the Whitman edition of "Tarzan of the Apes" and some of the comments concern Whitman's followup edition, "The Return of Tarzan."

The cover of "Apes" states: "Authorized Unabridged Edition Prepared Especially for Young Readers." A close reading of the wording on "Return," however, shows the omission of the word "unabridged." Nor does the word "abridged" appear. Actually, its absence is appropriate, for what was done by Whitman to "The Return of Tarzan" was far more devastating than a mere "abridgement."

Whitman didn't merely abridge the book; it butchered it. The changes were so deep and devastating that, to be honest, Whitman should have changed the title as well, to something like "The Revision of Tarzan."

Consider this simple fact: ERB's "The Return of Tarzan" begins with a chapter titled "The Affair on the Liner." The first chapter of Whitman's hatchet job has the title "Tarzan Goes to the Desert."

In ERB's original, that chapter is titled "The Dancing Girl of Sidi Aissa," and it is the seventh chapter! Thus, Whitman simply chopped off the first six chapters!

Why did it do this? Probably the biggest clue is on the cover: "Authorized Edition Prepared Especially for Young Readers."

So, the preparation got rid of Tarzan smoking cigarettes, drinking ansinthe in the Paris night club circuit, fighting Parisian cops and, ta da, coming to the brink of going too far with another man's wife. The near-affair with Olga de Coude was probably Tarzan's worst sin in the minds of the Whitman editors, but a lot of other baggage went with it.

The "crime" in all of this was that the book itself was published, packaged and presented to the public as if it were a "real" ERB story. Since it was generally in the same format as Whitman's "Tarzan of the Apes," it would appear to readers that it was a legitimate sequel.

This wouldn't be the first time a Tarzan book was revised or, should we say, "dumbed down," but those editions are usually published in a format that is more obviously intended for young readers, not disguised as a real entry in the canon.

If this was an "Authorized Edition," I don't know who at ERB Inc. back in 1967 was the one who "authorized" it, but it may be that even ERB Inc. didn't realize what a sham this book was to be.

Since Whitman retitled the original chapter 7 as chapter 1, it also had to do some rewriting of at least the start of the book to explain what Tarzan was doing in the desert in the first place. Those who have read the real "Return of Tarzan" already knew, from chapter 6, that Tarzan was headed there as an agent of the French secret service.

The real ERB chapter, "The Dancing Girl of Sidi Aissa," thus begins, "Tarzan's first mission did not bid fair to be either exciting or vastly important."

The first chapter of the Whitman edition starts with: "Tarzan looked out across the desert of North Africa and thought, 'This is better than civilization.' "

The Whitman edition then spends a few paragraphs on the back story, mentioning that Tarzan had been to Paris and not found civilization to his liking, bringing the "young reader" up to speed, but mentions nothing of Tarzan's first encounters with Rokoff, the fight in the Rue Maule, the attraction to Olga de Coude and the duel with Olga's husband.

Midway in the book one would also look in vain for a chapter titled "The Wreck of the 'Lady Alice'." I suppose the fact of the wreck is blended somewhere into the preceding or following chapter(s) since it is essential to the plot, but probably rewritten and greatly reduced in size.

And, at some point in the Whitman edition Rokoff must be introduced, since he, too, is essential to the plot. I suppose there's a paragraph somewhere telling his back story as well. As readers of the real "Return of Tarzan" know, he too haunts those opening chapters of the book and there is no need for a "re-introduction" of him later.

I did not do a passage-by-passage comparison of this Whitman edition with ERB's real novel because, Why Bother? Once it is seen how the opening chapters of the story have been eliminated, the entire book becomes a lost cause.

The only redeeming value of the volume that I can see is that the cover shows a seldom-illustrated scene of Tarzan, in desert garb, about to stab Numa "El Adrea," and there are lots of inside illustrations of scenes from the story, which are interesting as well.

One who has read only this Whitman edition may not realize what they are missing, and those fans ought to take steps to get a copy of an earlier edition, even if it's the online version by Gutenberg.com.