Editor's Note: Though probably practiced much earlier, the earliest known form of "dust jacket" (circa 1830s) was plain paper which totally wrapped individual books to protect cloth bindings or more expensive leather and embossing. These "wrappers" had to be torn to get to the book, and thus were discarded. Sometime around 1850 printers realized the wrapper could be a form product identification and/or advertising and began printing, usually in one or two color, the wrapper which was then, again, routinely discarded by the end purchaser. By 1880 the now familiar "flap style" jackets were in general use. These left the text block open and did not need be destroyed to read the book. Circa 1920 the print indistry moved the "cover art" from the cloth or leather binding to the paper jacket, reducing costs significantly. From that time on the book jacket became more important as a marketing tool. For some book editions the original dust jacket has a far greater value than the book itself.

In my education about books, I think the first time I ever heard the word "jacket" applied to a book was in the early 60s, a couple years after I first discovered Mad Magazine. Inside the magazine one day was an ad for a hardbound Mad book, "Mad for Keeps." Oh what a treasure this seemed to me, but the price seemed a bit steep—about $2.95, as I recall, as compared to the "cheap" 25-cent price for the magazine. Nonetheless, since this contained material published BEFORE I discovered Mad, I HAD to have it, so I asked my local variety store (which had a book section in the back) to order it for me, and I haunted the place every two or three days until the book came in.

But, back to the ad. In describing the book, the ad said it had "Full Color Jacket." I had no idea what that meant, but noted the cover showed a closeup of Alfred E. Neuman and, yes, he was wearing a jacket. But it was an all-black jacket. So, I was confused.

I've never been too sure of the "dust protection" purpose of the jacket. Yes, it's to keep dust off the book. But then, that means that the dust will get on the jacket instead! So, you still have to dust—either the jacket, or the book itself.

However, we all know we can appreciate that jacket for OTHER reasons: the beautiful artwork thereon. And, I'm sure that the jacket served more than a utilitarian purpose in the minds of the publishers. It was, in essence, packaging—sometimes called the dust "cover" or "wrapper," just as some for-sale items are made more desirable by the paper in which they are "wrapped." A lot of food is probably sold at the grocery store—not so much because of what is in the box—but because of what is ON the box—how attractive the packaging, or wrapper, makes the product look. 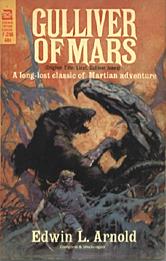 The dust jacket can get us more excited about a book than simple colored boards. In a recent discussion on ERBlist for instance, some have acknowledged that they never would have purchased Lester's "Gulliver of Mars" if not for the Burroughs-style Frazetta cover. Though not a jacket, per se, the paperback cover serves the same purpose, and ACE certainly knew what kind of art would sell books to fans who were rabid for more ERB-type stories.

Yes, it's true: We DO judge books by their covers...er...jackets, wrappers, etc.