The Heroes of Edgar Rice Burroughs from the Series Novels

TARZAN OF THE APES

The crown jewel in this American author's pantheon of heroes is a character known as Tarzan. The infant son of English lord John Clayton and his wife Lady Alice, Tarzan is raised by a species of African apes known amongst themselves as the mangani. Tarzan is portrayed as the supreme individualist, a master survivor in a cruel and savage world. Yet for all the hardships and brutality of the jungle life, there lurks a man of honor and conscience. Tarzan's ability to love is as determined as his will to live, and when he does find love with a beautiful girl from Baltimore, his life is dedicated to her safety and protection. The tale begins in 1888, but has not yet seen an end in 1998!

Tarzan sat with gaze fixed upon the floor for nearly an hour. It was evident to him from the notes that they did not know that he and Tarzan of the Apes were one and the same.

"I have given my heart to another," he repeated over and over again to himself.

Then she did not love him! How could she have pretended love, and raised him to such a pinnacle of hope only to cast him down to such utter depths of despair!

Maybe her kisses were only signs of friendship. How did he know, who knew nothing of the customs of human beings? Take me to AFRICA!

Ed Burroughs' first novel was about an ex-Confederate officer who is mysteriously transported to the savage and barbaric world of Barsoom (Mars). There he encounters strange, alien races continuously embroiled in warfare over the dwindling resources of a dying planet. He meets the incomparable Dejah Thoris who is a captive of the fierce six-limbed green martians, and from that moment on his sword arm is hers to command. Carter's skills in the martial arts and his uncommon excellence with a sword are put to the test to deliver Dejah Thoris back to her homeland and to eventually secure the peace of Barsoom.

I am a very old man; how old I do not know. Possibly I am a hundred, possibly more; but I cannot tell because I have never aged as other men, nor do I remember any childhood. So far as I can recollect I have always been a man, a man of about thirty. I appear today as I did forty years and more ago, and yet I feel that I cannot go on living forever; that some day I shall die the real death from which there is no resurrection. I do not know why I should fear death, I who have died twice and am still alive; but yet I have the same horror of it as you who have never died, and it is because of this terror of death, I believe, that I am so convinced of my mortality. Take me to BARSOOM!

A Connecticutt man, David Innes accompanies inventor Abner Perry in a fantastic mechanical mole to explore the earth's crust. A malfunction sends the machine burrowing straight for the earth's core, where both expect to be incenerated. Instead, they pierce the earth's rocky mantle to enter a prehistoric world at the center of the earth, a world that has its own sun and moon! Innes meets a savage beauty named Dian and he toils in her behalf until he becomes emperor of all he surveys. This contemporary (1913) tale lives on in the hearts of fans.

As he came for me, like a great bear, I ducked again beneath his outstretched arm, and as I came up planted as clean a blow upon his jaw as ever you have seen. Down went that great mountain of flesh sprawling upon the ground. He was so surprised and dazed that he lay there for several seconds before he made any attempt to rise, and I stood over him with another dose ready when he should gain his knees.

Up he came at last, almost roaring in his rage and mortification; but he didn't stay up--I let him have a left fair on the point of the jaw that sent him tumbling over on his back. By this time I think Jubal had gone mad with hate, for no sane man would have come back for more as many times as he did. Time after time I bowled him over as fast as he could stagger up, until toward the last he lay longer on the ground between blows, and each time came up weaker than before. Take me to Pellucidar! 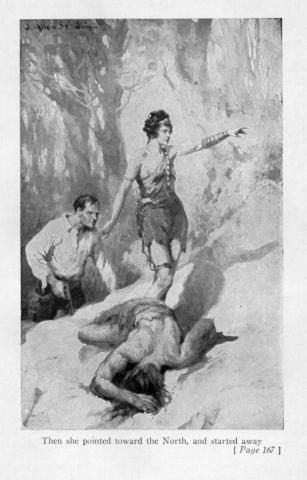 American Bowen Tyler on a sea voyage is the victim of a U-boat attack by a submarine manufactured in his own yards! Through an exciting mix of circumstance and bravery, Tyler and fellow survivor Lys LaRue and the crew of an English tug boat eventually take control of the German U-boat. Because of a saboteur the sub's complement is misdirected and, running low on supplies and fuel, they encounter the mysterious island of Caprona where time and evolution have run amok.

I had gotten well over the area of the wreck when not a half-dozen yards ahead of me a lifeboat shot bow foremost out of the ocean almost its entire length to flop down upon its keel with a mighty splash. It must have been carried far below, held to its mother ship by a single rope which finally parted to the enormous strain put upon it. In no other way can I account for its having leaped so far out of the water--a beneficent circumstance to which I doubtless owe my life, and that of another far dearer to me than my own. I say beneficent circumstance even in the face of the fact that a fate far more hideous confronts us than that which we escaped that day; for because of that circumstance I have met her whom otherwise I never should have known; I have met and loved her. At least I have had that great happiness in life; nor can Caspak, with all her horrors, expunge that which has been. Take me to Caspak! 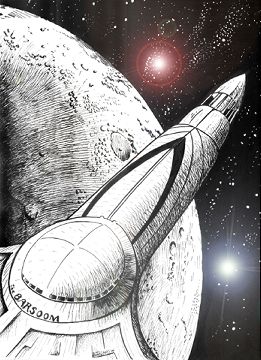 In 1966, on a "futuristic" airline passenger ship, a man encounters a fellow who tells a series of tales encompassing the incarnations of the Julians. The first tale relates how one Julian voyaged to the inner world of the Moon, rescued a princess and fought strange and terrifying creatures. The second tale occurs years later when the Earth has been conquered by lunar invaders. The remaining tale is many years into the future and the humans have begun to reclaim their planet, a world that has not faired well under the brutal reign of the Kalkars.

A moment later I had descended to the mouth of the tunnle and drawn Na-ee-lah into the safety of its interior. My arm was still around her and hers about me as she stood there sobbing upon my breast. She was uttterly relaxed and her supple body felt so helpess against me that there was suddenly aroused within me a feeling such as I had never experienced before--a rather indescribable feeling, yet one which induced, seemingly, an irresitable and ridiculous desire to go forth and slay whole armies of men in protection of this little Moon Maid. Take me to the Moon!

Napier departs Earth in a privately built rocket ship intending to be the first human terrestrial on Mars; however a slight miscalculation turns the voyage from triumph to disaster. Carson Napier discovers his ship is hurtling toward the sun. Lucky beyond belief, however, at the last minute his ship is drawn to Venus. Into the thick cloud cover this young man descends to land upon a world unlike any other. A contemporary of the 1930s, our Carson is a fellow always equipped with a snappy comeback and a tenacious grip on life. Carson eventually falls for the Vepajan princess he rescues, but it takes a little doing:

"I was very busy; and, if the truth must be told, I was not particularly excited about visiting the princess. In fact, I rather dreaded it, for I am not particuarly keen about fawning and kotowing to royalty or anything else..."Take me to Amtor!