One of the major innovations of the "enlightenment" of the eighteenth century was the idea, first propounded by the French philosopher Jean Jacques Rousseau, that man in "a state of nature" was good, and that it was only the distorting influence of civilization and government that brought about crime. The idea, of course, ran directly counter to both religious and philosophical concepts previously held. Almost all Christian sects still held to the doctrine of "original sin," which teaches that man is inherently weak and only through grace can withstand temptation; on the secular side, Thomas Hobbes, in his Leviathan, had described the state of nature as "No Arts; no Letters; no Society; and which is worst of all, continuall feare, and danger of violent death; And the life of man, solitary, poore, nasty, brutish, and short." 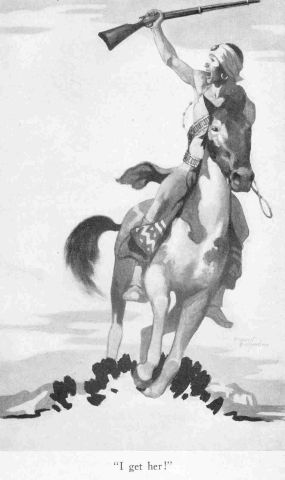 The concept of the "noble savage" was adopted by the German romantics of the nineteenth century, and reached its apogee in the four Wagnerian operas which comprise The Ring of the Niebelungen, which presents Siegfried as the ultimate hero precisely because he stands outside his civilization — his very existence violates every taboo of the cultured world, his parents being brother and sister and his wife his aunt.

On this side of the water, where real savages were encountered, there developed a curious dichotomy between the philosophic and practical sides of the matter. James Fenimore Cooper's "Leatherstocking Tales" presented the Indian in the mold of Rousseau's "noble savage," while on the real frontier sporadic warfare between settlers and Indians continued from the first settlements in the XVII. century until the end of the XIX. century. A typical example of the two extremes can be found in the War of 1812, when the Creek chieftain Tecumseh allied his people with the British while Pushmataha of the Choctaws fought alongside the U.S. troops. Tecumseh's raids on frontier settlements brought about William Henry Harrison's bloodbath at Tippecanoe, which gave him his nickname, while Pushmataha was made a brigadier general in the U.S. army, and was honored in Washington during his visit in 1824. Thus it appears that whether an Indian was a "noble savage" or a "vicious redskin" depended upon whether he was friendly or antagonistic. 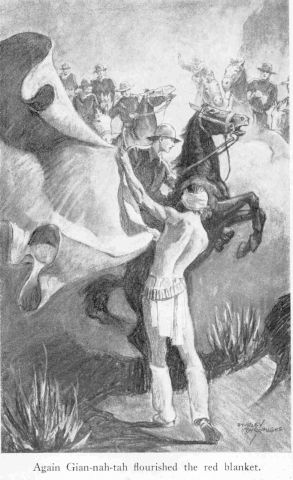 All this is to lead up to the treatment of the Apaches in Edgar Rice Burroughs' two books on the Apaches, The War Chief and Apache Devil. Burroughs served in the Seventh Cavalry at Fort Grant, Ariz., from May 1896 to March 1897 (the details of his Army career can be found in Porges' biography) and became familiar with the Apaches while there. There is no indication that he ever encountered Geronimo; however, his notes mention a renegade known as "the Apache Kid", who may have been the inspiration for Shoz-Dijiji. In both The War Chief and Apache Devil, Burroughs treats the Apaches far more sympathetically than most of the whites, obviously regarding them as the epitome of Rousseau's "noble savages." This treatment is in sharp contrast to his depiction of the same Apaches in A Princess of Mars, where the murderers of John Carter's friend and partner Capt. Powell are depicted as vicious and ruthless.

So where exactly did Burroughs stand on the concept of the noble savage? To answer this question, we must examine the entire corpus of Burroughs' work. In the Tarzan books, of course, he created perhaps the archetypical noble savage (or savage noble, if you want to turn the concept on its head). But in Tarzan of the Apes we find also the tribe of Mbonga, of whom Burroughs says, "Their yellow teeth were filed to sharp points, and their great protruding lips added still further to the low and bestial brutishness of their appearance." Hardly "noble savages," these! 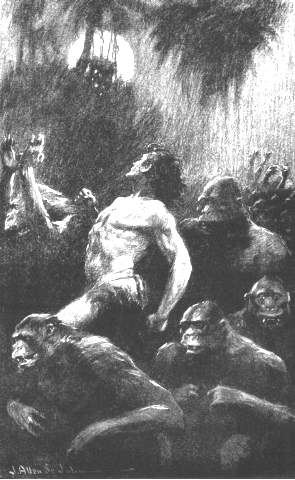 In The Return of Tarzan, we meet the Waziri, who will reappear throughout the series, and who conform more closely to the "noble savage" ideal, and the "frightful men" of Opar, who obviously do not. Similarly, in the Mars series, Burroughs contrasts the natural dignity and reserve of the Tharks (with the exception of Tal Hajus) with the brutality of the Warhoons, and in the Pellucidar books he plays up the positive qualities of the Sarians, Amozites, and the people of the Anoroc Islands, while emphasizing the brutality of the followers of Hooja the Sly One. The same distinctions can be found in The Land That Time Forgot and The Cave Girl.

From the foregoing analysis, it appears that Burroughs is typical of American writers in the duality of his perception of savage peoples. The key to answering the question can only be found when we realize that for Burroughs, savages (like civilized people) are first and foremost individuals. The contrast between Tars Tarkas and Tal Hajus, between Mbonga and Mugambi, and between Ghak and Hooja is mirrored in the contrast between Hauptmann Fritz Schneider and Erich von Harben, or between Nikolai Rokoff and Zora Drinov.