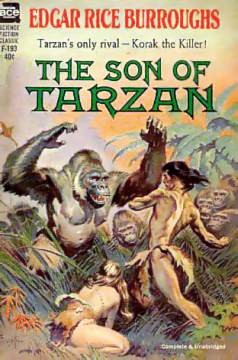 My reading of Tarzan of the Apes suggests that Clayton was 19, near 20, when the Porters reached Africa. Coupled with the date of 1888 that would place us near 1907. Inserting a year for the events of RETURN and BEASTS puts us at 1909. As early as 1910 Korak would have been born, thus his age at the start of WWI would be 4.

Korak's development is similiar to his sire's and, if we follow ERB's heredity theories, most likely would have been as large as a full grown man by age 10. We are also not told whether Korak fought in WWI from the beginning or may have been a johnny-come-lately in the final year (as were most Americans who fought in Europe). The probability of the latter is greater if one considers Korak's life and romance with Meriem. Korak was a married man at the end of SON.

When does a boy become a man? In some societies as early as age 13. Some believe when a boy stops doing boy things and does man things he is a man. Korak, by that definition, was a man quite early.

Rather than assume traditional ages for desire to marry or age of consent, one might make a case for EARLY marriage. What if Tarzan and Jane had met and married well before their second score? What if Korak and Meriem wed before they were out of their mid-teens? Such young marriages might have been offensive to the readers of ERB's day, thus he deliberately misled or outright lied about their ages and the sailing date from England, but did so by probably less than 3 years up or down from each of the events as there are too many real world references embedded in the texts to stray too greatly.

Tarzan and Jane at 16. Korak and Meriem at 16. The LAST year of WWI for Korak. These dates/ages make more sense and remain within the historical context of the stories.

Of course, all the above could be a pile of farmer's friend!

When I raised the above comments in November 1998 at ERBList, Bob Zeuschner replied:

The difficulty with Tarzan and Jane married at 16 is that in RETURN Tarzan is hired as a secret agent for the British -- they wouldn't have hired a 15-year-old kid to do that (married Jane at 16 so he would have been 15 in Paris).

Secondly, in RETURN, Tarzan comes back to his cabin and the text says (if I may quote):

"The door was still closed and latched as he and D'Arnot had left it. He raised the latch and entered. Nothing had been disturbed; there were the table, the bed and the little crib built by his father -- the shelves and cupboards just as they had stood for over TWENTY-THREE YEARS -- just as he had left them nearly TWO YEARS before." (chapter 15 "Back to the Primitive" p.191 of the McClurg/G & D printing).

ERB may have been sparing our feelings by giving the impression that Tarzan was 23 or 24 when he and Jane married at the end of RETURN. But how to account for his relationship with the British gov't re. the Arabs?

Fun to speculate, isn't it?

Bob located the text which states the impossibility; yet, the texts also state the improbable. We cannot, therefore, rely on the texts for the truth; thus, ERB (as the narrator of the Greystoke saga--which is not Tarzan's name anyway) either deliberately lied, or as the author bent his own tale(s) to take advantage of current events to include them in his book(s). THE SON OF TARZAN was first serialized in 1915--during the first years of World War I. TARZAN THE UNTAMED and TARZAN THE TERRIBLE were written during World War I. It is in these specific stories that the conundrum of Korak's age is found.

My take? Early marriages—teen marriages—and the TWENTY THREE YEARS as left TWO YEARS BEFORE is the red-herring.

Or we have to assume that Korak's life with Meriem occurred in a time warp dimensionality that progressed at a greater speed (to mature them) than the world in which Korak's father and mother lived.

Or—and this is what I firmly believe—ERB, as an author, screwed the pooch. He aged Korak prematurely, just to include him in a book. As far as I am concerned that is what happened. I've done the same thing in my own stories (see LA OF OPAR—the characters Darian and Claude, Jr.), though that particular occurrance was a nod and wink to the Grand Master of Adventure having feet of clay in keeping his chronologies straight!