I was excited and very curious to see this Edgar Rice Burroughs book finally in print. It had been a rumored volume for as many years as I had been an ERB fan. What little information had eked out over the years from the few who had been allowed to peruse it was not very enlightening to say the least. Finally my volume arrived in the mail I was excited to own it and finally get to read it at last.

The book was a beautiful volume. The publisher, Donald M. Grant is to be commended for producing such a gorgeous high quality first edition. I was equally impressed with the cover painting and the charcoal rendered illustrations done for the book by Ned Cameron. My appreciation to the many people who had a part over the years in pushing this publishing project into fruition. It is a book to proudly add to a Burroughs collection.

Upon reading the book I found it a mixed experience. There were moments when Burroughs writing magic shone through and it was a real pleasure to drink it in like a fine wine. The characters were richly developed and involving. But I kept anticipating more from the story. The dialogue and staging were well written. The villain Max Heimer was as dastardly a villain as ERB ever conceived and I could hardly wait for him to get his head handed to him on a platter. But when that finally happened it was something that took place offstage and as an afterthought to the rest of the story. That was disappointing to me as a reader. 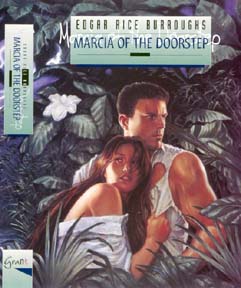 The initial suicide in the book was a decent plot devise but I felt that the second suicide was not only tragic but unnecessary to the story and put a bad taste in my mouth. Too many good people came to sad ends and the villains were let off easy. On the positive side the resolution of Marcia’s dilemma was nicely handled and was a surprise to me. Burroughs had left clues throughout the book as to the mystery of her past, but did not tip his hand ahead of time.

The theme of the book to me was the tragic consequences that occur when people get trapped into life scripts that they and society impose upon themselves. Such people have a difficult time breaking free of the restraints of the roles that they find themselves playing, regardless how unhappy or unworkable that their lives are.

Marcus Aurelius Sackett (I envisioned Thomas Mitchell) was locked into a script of being a theater actor even when it was a dead-end pursuit. Clara Sackett was the quiet enabler. Life turned out well for them but certainly not of their own making.

Marcia, the little baby found upon the Sackett’s doorstep was a well-balanced young lady with a fair and level outlook upon life. She would have been content not to have explored her own ‘lost’ beginnings except the tragedy at sea occurred to make her twice lost, as it were. She was forced by circumstance to grow beyond her own comfort zone and, after some excruciating emotional pain, came to a place of wholeness and happiness that would have eluded her otherwise. Thus Marcia’s own emotional journey became the catalyst for the changes and new growth that occurred in the lives around her. It was a good gift to the parents who had raised her so well and the others to whose lives she had became important.

Danton Burroughs’ introductory remarks on the book were invaluable. The fact that much of the book and many of the characters were drawn from ERB’s acute observations of his own family and the new Hollywood environment he was witnessing firsthand made it more interesting to read.

It is hard to judge this book without being able to compare it with the other melodramas of the day that were being written in that day. Trying to compare this book with the current popular writers of similar romance fiction as Danielle Steele or Mary Higgins Clark makes for a hard comparison. Did Burroughs accurately portray the society and mores of his day? I would think so. Would he have been a successful writer of romantic mysteries if he had decided to do more novels in this vein? He was certainly more versatile than many critics gave him credit for. Perhaps, in his day, if he had written more traditional romance novels they would have sold well enough but I doubt that they would have contributed to any lasting legacy as have the romantic adventure works that he wrote.

I was sad to see that the large bookstores did not stock this book. Knowing what does pass for romance fiction these days, that is their loss. But then we can all agree that Burroughs fans are by nature more discerning and satisfied readers.