Maureen O'Sullivan
"No Average Jane"
A Book by David Fury

In Maureen O'Sullivan "No Average Jane" David Fury has written what must be considered the definitive biography of the actress who gained her widest fame in her role as Jane with Johnny Weissmuller's immortal portrayal of Tarzan of the Apes.

Fury's method of telling is straight forward without complicating his narration with psychological meanderings. He presents an interesting story of Maureen's somewhat stormy upbringing and childhood in Ireland that leaves one with the impression that her beauty, charm and inner strength came with some difficulty, which supported her well throughout a long career of making 70 motion pictures. It is this portrait of a staunch, strong-willed woman that informs this biography, and it leaves the reader with admiration for her many accomplishments.

Each of her pictures is given a synopsis and a fine commentary, including her thoughts about each role. Fury worked closely with O'Sullivan on this biography, and the text comes across as vividly as though she were in the room, telling of her life and many roles in person. It is a lively and engaging account that makes each film seem an important piece of her life's story rather than a simple listing of facts.

O'Sullivan got her big break by being cast as Jane, and she is most remembered for this sterling role that she played so famously well. However, until I read Fury's book, I did not think of her as one of the early stars of the Golden Age of film in the 1930's. Even though she often played a secondary role in her pictures, she was an actor who always had a job because she filled an important role as the sweetheart of the other couple in the story. She was among those actors who are often overlooked but seem strangely familiar to us when we see those many films of long ago. 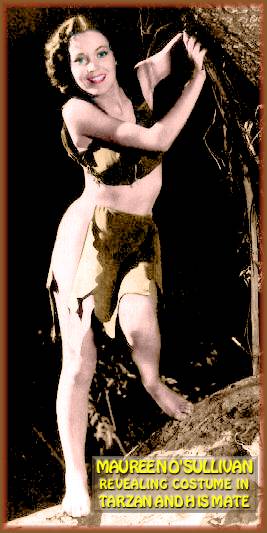 Publicity photo of Maureen O'Sullivan in "Jane" costume. From article at Tangor Responds.

I must say, that for those of us who grew up in the 1940's, the Weissmuller/O'Sullivan duo were the REAL Tarzan and Jane, and all others who came after were but pale imitations. It was only seeing those Tarzan pictures again in maturity that I came to realize the sizzling sex this pair brought to the screen. Back then, O'Sullivan was more of a Mom figure to us for indeed she treated the Weissmuller Tarzan like a big boy most of the time, explaining the world to him and setting him on the right course in life. We know from the books by Edgar Rice Burroughs that this was not Tarzan and Jane as he envisioned them, yet even he was charmed by the portrayal, and the relationship will always remain a classic, playful love that I'm sure that many a boy carried over into his own marriage.

Fury's overall approach as a biographer is to be all-inclusive as to the facts of her films and is filled with a kind of star-struck admiration for the lady herself. As well as including the many reviews of each minor picture, we get all the juicy details of the gossip columns of Louella Parsons on her every flirtation and date up to her marriage with John Farrow. One might do a bit of skimming when it comes to reading the description text of each and every B-picture, and the hungry following of the love-affairs, though somewhat tedious, does put one into the context of the times when Hollywood was brash and young in the 1930's.

Maureen O'Sullivan is an actress we vaguely recognize when we watch many great pictures of the 1930's. She was in: The Thin Man (1934) The Barretts of Wimpole Street (1934) David Copperfield (1935) Cardinal Richelieu (1935) Anna Karenina (1935) A Day At The Races (1937) A Yank At Oxford (1938) Pride and Prejudice (1940) - - all films I finally figured out who the familiar actress was about half-way through the picture. She played with nearly all the great actors and actresses of Hollywood of the time. We take her fine job of acting almost for granted, as did Hollywood, and say, "Oh, yes, that 's Jane." Fury's account opens our eyes to her many fine roles, and we gain a new appreciation for her amazing career.

One comes to the end of this fine biography realizing that Maureen Paula O'Sullivan was one of the solid actresses of Hollywood in her early days as one of the more popular ingenues at MGM in the 1930's. She continued to work into the early 1940's when the war intervened, and she made fewer pictures while her husband, John Farrow, was in the conflict. However, she did make two interesting Tarzan flicks -- Tarzan's Secret Treasure (1941) and Tarzan's New York Adventure (1942) which was her 6th and last paring with Johnny Weismuller as Tarzan.

Maureen O'Sullivan seems to have been one of those unique personalities who was always positive in her relationships with people and with her work. She never thought too highly of herself even while being one of the top Hollywood stars of the 1930's. O'Sullivan indeed had that bright, cheerful attitude that comes across so well in her pictures, and it served her well as a successful actress and as a mother of seven children with her famous, movie director husband, John Farrow. She was simply a wonderful human being with loads of talent and personality who was a favorite both at the studio and with her adoring fans who remember her fondly to the present day.

At times, it seems that Maureen O'Sullivan went from role to role with ease, yet her life was not entirely a bed of roses. Fury lifts the veil on her marriage just a little when he mentions John Farrow's infamous philandering and his temper with the children. Farrow was known as a tough director and was not liked by some of his actors. Perhaps more could be told, but this biography is neither a psychological study nor a revelation of gossip, so that part of the tale remains to be told with more detail. One may find another side of the story in daughter Mia Farrow's autobiography "What Falls Away" (1977). Maureen and John separated after the death of their oldest son in a plane crash. By this time, he was a hopeless alcoholic with his director's career in ruins, supported from a distance by his wife, who had a successful career on the stage on Broadway. After Farrow's death, Maureen lived on in her large apartment in NYC, doing stage plays and television shows, the actress to the last.

As mentioned above, this biography is filled with a wonderful sense of nostalgia, and Fury goes a long ways to show that it is truly America's nostalgia as well. The Tarzan and Jane portrayed by Weissmuller and O'Sullivan is a true American treasure of the films and will remain as an image of simpler times that we all long for in these later days.

O'Sullivan's story reveals a wonderful, courageous woman we can admire still. "No Average Jane" indeed, Maureen O'Sullivan lived and died strong and true as we might expect from the wife of Tarzan. Fury shows us that she was much more than this single role, and the journey through this fine biography is worth taking by everyone wishing to know this lovely person better. Like everyone who knew her, you are sure fall in love with her life-long example of courage and charm.

A handsome 6x9.5 inch hardcover in a suitable Irish green with bright gold lettering. The dust jacket contains photographs of Maureen both front and back and on the spine. The font is eminently readable, but the real bargain are the over 200 excellent photographs printed on glossy paper. All in all, a brilliant addition to your private library be you Tarzan fan or no. Artist's Press delivers a book of the highest bibliographical standards: Smythe Sewn case: 60# acid-free paper: delight in ownership.