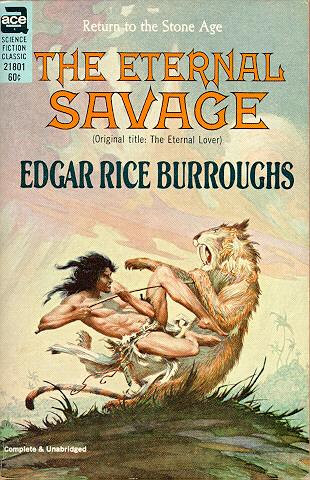 A Word Study of
The Eternal Lover

As Robert R. Barrett points out in his excellent preface to “Minidoka” entitled “Introduction to a Historical Fairy Tale,” Burroughs even appears to adopt Lear’s method of combining syllables taken from normal words to create new, more humorous ones. And his own facility in concocting names that were rhythmic, colorful, and humorous, that made his later stories work so well is strikingly evident in this early experiment. Burroughs had a wonderfully keen ear and, even this early in his life, he displays a penchant for experimenting with phonetic jargon and odd syllables, combining them to create new, and strange words that sounded realistic within the context of the worlds he created.”

With this fact in mind, I take up my pen in an investigation of the names Burroughs employed in his novel “The Eternal Lover.” This is a very early novel, the two parts being written in 1913 and 1914. All of his clever forces of naming are here displayed in full array.

I do not intend this to be a scientific study of ERB’s word formations since this would be impossible without getting into the mind of the author himself, but rather, it is an entertainment that employs guesses about the reasoning behind some of the names found in this novel.

The title “Eternal Lover” itself has always reminded me of H. Rider Haggard’s ubiquitous theme of reincarnated lovers who are reunited after eons of time. Perhaps Burroughs had Haggard’s theme in mind when he wrote this book.

Many of the names used in Eternal Lover seem to come back as reincarnations in later novels. There is probably nothing much in this other than the fact that ERB liked the sound of the names. But who really knows? The novel was an early one and a strange one that played with many themes that came back under other guises in his later works.