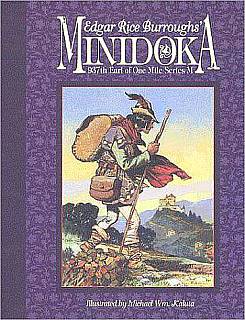 An Application of Propp's Morphology to Minidoka by Edgar Rice Burroughs

by David A. Adams

Rather than being a fairy tale in the classic sense, ERB's Minidoka, 937th Earl of One Mile Series M is a comic reversal of the fairy tale form that plays loose and free with all its familiar characters and situations. Nevertheless, Propp's morphology can be applied to the story with good effect, revealing it to be not the loosely structured confusion it may appear to be on the surface but a carefully crafted tale allowed to unravel for a comic purpose. Thus, Minidoka what might be called an anti-fairy tale full of rollicking fun, belly laughs, and broad humor.

ERB painted this little story with the broad brush of American folk humor found in Paul Bunyan or Pecos Bill. The story stomps around the barroom floor with a mug of beer in hand and bumps into tables spilling drinks and creating chaos among its listeners, but in the end Minidoka is as good as anything the Grimm Brothers produced. Burroughs takes a swipe at every sacred cow within reach, including the popular view of heaven, but he's only half serious, poking his readers in the ribs with a jabbing finger and laughing out loud, "For crying out loud, fill up my glass again, so's I can spill out some more!"

There are many things about Minidoka that might be mentioned as formative ones since this was ERB's first large scale effort at writing. The thing that struck me upon this reading were the Trickster elements found in the hero, Minidoka. It is true that the Princess was the one turned into a coyote, the standard form of the Trickster in North American Indian folklore, but she is a victim of higher powers that the hero deals with in a typically heroic fashion. Minidoka is the real Trickster in the story and I see him as the spitting image of ERB himself. Burroughs stomps out onto the stage and spinning his lasso tells us a tall one, yet all the while we know who and what these rough characters will become throughout a whole lifetime of writing. It's really an odd situation to get this first story last in the history of this author, Minidoka wasn't published until 1998; yet, in a way it is a form of poetic justice: ERB was fond of these odd reversals of fate -- Minidoka is indeed both the alpha and omega of ERB's career.

The Trickster in some of his manifestations does everything ritually backwards. He was among the Lakota of the great plains known as a Thunder-Dreamer or heyoka, the "clown" of the tribe. He was one who often restored good humor, restraint, and balance to overly serious lives or situations. Perhaps ERB is our heyoka which is why his work has not been taken seriously. ERB became a powerful Thunder-Dreamer, and his gift has been a great one for those who can see and accept the dream.

Those familiar with ERB's biography will easily recognize Minidoka's situation reflecting ERB's own background at the time he wrote his tale. He came from a military family and in 1896 he was a soldier in the 7th U.S. Cavalry at Fort Grant, Arizona Territory. In 1900 he married Emma and spent 1903 in Idaho dredging for gold with his brothers on the Snake River. Minidoka was written at this time -- his first piece of fiction -- 82 pages handwritten on the backs of letterheads and odd sheets of paper. The reversal of roles of cows and horses is a simple comic switch, but one that informs the reader of his intent to turn the world upside down in this tale. It is the method of the classic Trickster tale, and becomes a hallmark of many of his later novels, where it was often used for a biting satire of politics, manners and morals, and the follies of blind belief in organized religions.

A true Propp Analysis only lists narrative events, however, I will take the liberty of commenting upon some of these events to show how ERB used his story to present an upside-down fairy tale filled with comic reversals. My comments are not exhaustive of the riches to be found in this story, yet this analysis is a useful guide to further speculation.

The initial situation: There are two warring kingdoms named Pzvrijhk Brady (called Smith) and Conner Bil. Minidoka (the hero) is a career soldier from a military family -- a member of Own Royal Light Cow Guards on Conner Bil's side.

* This power also seems prescient of ERB's own authorial powers to create strangely combined creatures in his later writing. One might also speculate upon ERB's thoughts about reading Darwin's Descent of Man, which he added to his book collection in January 1899. There is a cartoon of an ape on the flyleaf, drawn by his own hand, labeled "Grandpa." Burroughs later wrote an interesting account of evolution in his Caspak trilogy based upon transformations, not in a specifically Trickster fashion but related to this early treatment at least in spirit.

** The literary device of embedding one tale in another can be found in many places, especially the Arabian Nights and in the excellent fantastic tales of E.T.A. Hoffmann. It is usually employed to present a deeper psychological meaning to the story, and indeed works admirably this way in Minidoka. During his long career as a storyteller, ERB was fond of setting his stories into elaborate frames and often wrote at least two tales concurrently, having separated his characters and sending them upon parallel adventures, which were told in alternate chapters.

The Jungle Tales of Tarzan:
A Morphological Study
Based Upon Vladimir Propp's
Structural Theory of Folktales

Edgar Rice Burroughs wrote two stories intended specifically for children. They are: The Tarzan Twins (1926) and Tarzan and the Tarzan Twins with Jad-Bal-Ja, the Golden Lion (1928). These have been considered to be among ERB's lesser writings until they were realized to be little masterworks in the genre of fairy tales when I applied Propp's system of structural analysis to them.

The great, Russian folklorist, Vladimir Propp (1895-1970) published his first book, Morphology of the Folktale in 1928. Though well-received, the book remained in relative obscurity until it was translated into English in 1958. It is not my intent to argue the validity of Propp's theories since this article is meant for a popular audience more interested in the works of Edgar Rice Burroughs rather than arcane studies on the folktale.

The interesting thing about Propp's work is the fact that he developed a method to study the folktale according to the functions of its dramatis personae. He claims that these "functions" or acts of a character are limited in number and follow a more or less identical sequence. The word "morphology" simply means the study of forms -- the study of component parts in their relationships to each other and to the whole -- in other words, the study of the story's structure.

Since Edgar Rice Burroughs is recognized as being a great story teller, I wondered if Propp's functions could be applied to his two Tarzan Twins stories. After finding them to be exemplary examples of the wondertale , or fairy tale, I turned my attention to his earlier stories, the Jungle Tales of Tarzan of 1916-1917. My findings are outlined in the following article.

Burroughs wrote his Jungle Tales in two batches: (1-8) in 1916, and (9-12) in 1917. These short stories are a rarity with Burroughs the novelist. The stories are related to each other, yet each one is complete in itself. Unlike the Tarzan Twins stories, these tales were not intended specifically for children, however, they do follow the sequence of Propp's functions remarkably well.

A brief summary of the structure of each tale is listed below. It will be useful to notice the range of Propp's functions in each tale before delving into the analysis itself.

Propp employs 31 functions or actions to be found in each story. A folktale in its complete form will use all of these functions. None of the Jungle Tales follow Propp's functions as well as the Tarzan Twins stories, which are both complete examples of folktales since they employ all 31 functions.

Only three of the Jungle Tales (numbers 1-3-10) start with Propp's beginning functions, however, these all end early since the stories are linked and completed in other tales.

Most of the tales begin with function VIIIa. One member of a family either lacks something or desires to have something. This is the place in the folktale that Propp notes as being exceptionally important, since by means of an act of villainy or the desire to eliminate something lacking, the actual movement of the tale is created.

It is remarkable that all of these tales follow the Propp functions in order. Burroughs did not always include the final function XXXI. The hero is married and ascends the throne because they were intended to be open-ended enough for the sequence to continue. We might also assume that in creating this series of linking short stories, Burroughs did not feel the need to go through Propp's introductory steps with each tale.

Although the Jungle Tales of Tarzan do not follow Propp's functions completely, this study reveals that they are closely related to the folktale structure, and demonstrate ERB's innate ability as a natural story teller.

Propp's focus is upon the specific actions of characters. A further thematic analysis can reveal the relationship between these stories in other ways.

[The items in Roman numerals are Propp's "functions." The small case explanations which sometimes immediately follow the functions are also Propp's own words. These explanations have been greatly reduced for this brief paper.]

Chapter 3 - The Fight for the Balu

Chapter 10 - The Battle for Teeka

I. One of the members of a family absents himself from home.

II. An interdiction is addressed to the hero.

III. The interdiction is violated, and a villain enters the tale

IV. The villain makes an attempt at reconnaissance.

V. The villain receives information about his victim. (Definition: delivery)

Chapter 2 - The Capture of Tarzan

VI. The villain attempts to deceive his victim in order to take possession of him or of his belongings.

VII. The victim submits to deception and thereby unwittingly helps his enemy.

VIII. The villain causes harm or injury to a member of a family.

This function is exceptionally important, since by means of it the actual movement of the tale is created. Absentation, the violation of interdiction, delivery, the success of a deceit, all prepare the way for this function, create its possibility of occurrence, or simply facilitate its happening. Therefore, the first seven functions may be regarded as the preparatory part of the tale, whereas the complication is begun by an act of villainy. The forms of villainy are exceedingly varied.

Chapter 4 - The God of Tarzan


Chapter 5 - Tarzan and the Black Boy


Chapter 7 - The End of Bukawai

These tales begins with Propp's function VIIIa, which is typical of ERB's type of questing story.

VIIIa. One member of a family either lacks something or desires to have something.

Tarzan is allowed to play with Gazan ever since he rescued him in chapter three. Gazan steals his rope and carries it to Teeka. Tarzan chases him to retrieve the rope and tussles with him, but Teeka is not worried at this harmless play. Tarzan thinks that in time Gazan will be able to use a rope as he does. Tarzan feels quite alone in the world and longs desperately for one who should turn first to him for succor and protection. Tarzan ropes Horta, the boar, kills him with his knife and eats his hot and dripping heart.