Where the Latest
Rumors and Gossip
Are Put To The Test

Only the best and least accurate rumors regarding the life and works of American author Edgar Rice Burroughs are included on this page. Our reporters make every effort to UNCOVER the Truth as we decide to print it.

Intended as humor. If any of these fabrications turn out to be true, all the better!

In a surprise move, guaranteed to devalue every ERB collector's collection of first editions, A. C. McClurg is bringing out all new First Editions printed from the original plates! Company president, Ima Gredy, recognized the untapped market uncovered by eBay. "With people willing to pay several hundred dollars or more for a ratty, musty-smelling old book without a dustjacket, there's a fortune to be made with our value priced $75.00 editions which are virtually indistinguishable." (from the original print run)

Look for Tarzan of the Apes and A Princess of Mars next April 1st. For advance orders, click here.

BERKLEY COLLEGE OF FILM TO MAKE
JOHN CARTER OF MARS

Motion Picture Science Students of the University at Berkley in California have been green-lighted to produce, script, direct, and act in a film based on the first Mars book by Edgar Rice Burroughs. Faculty Supervisor Professor Elmer Dudd met with ERBmania! reporter Tangor last Tuesday. "It (the Mars movie) is just about the biggest film project we have ever attempted." When asked if the POM movie will follow the original story by Burroughs, Dudd replied: "I've seen our first script draft, which was written by Iben Chaingin and Wealbe Smartar, professors of political science and philosophy. I can't comment directly on the plot elements, but I can say that all the errors in the original have been addressed. I smell a blockbuster!"

After Dudd's interview, Tangor spent the rest of the afternoon at the Dejah Thoris cast call held on the campus green. A wet t-shirt contest was in progress to narrow the field of eager actresses. Needless to say, Tangor's report missed deadline and so far none of his digital photos have arrived.

What we have long suspected, Edgar Rice Burroughs is as immortal as his Uncle Jack Carter. May 10th Officer Jack Lord pulled over a late model convertible driving too slowly approximately 11:15pm on Ventura Blvd. Behind the wheel was a spry 50ish year old man with thinning hair who gave the name "Ed Burroughs." Officer Lord began writing a warning ticket for impeding traffic while three young beauties, also in the vehicle looked on.

When asked why he was driving so slow, Burrows replied: "It's been quite a while since I've been here. I used to have an office nearby and that was what I was looking for ... but so much has changed."

Lord let the driver go after issuing a warning about safety on following all speed zone markings. It was only upon return to the precinct did Officer Lord put two and two together.

"Would have asked for an autograph!" Lord said.

Tangor hates to state the obvious: "He signed the ticket, didn't he?"

Reliable sources on the West Coast have revealed that the highly publicized Princess of Mars movie from Paramount is a hoax. The uproar was started to hide the long time negotiations with Rodent Pictures for the animated live-action musical production of Edgar Rice Burroughs' other famous series The Moon Maid.

Uncovered is thrilled to bring you the first report of the MOON MADE movie project. Shock director Raul Vertihooven has been signed to helm the inner moon adventure with music and lyrics by Blerner and Smithstein. Preliminary permits have been obtained from the National Parks Service to film entirely underground at Mammoth Cave in Kentucky and Carlsbad Caverns in New Mexico. Local businesses in these areas see dollar signs! As further details become available, you will find them here, first! 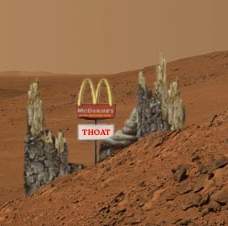 Today's NASA news conference at Johnson Space Center contained more than the usual updates of the deteriorating Hubble Space Telescope, continuing problems with the central fuel tank of the shuttle, or announcements of more budget cutbacks. Reporters were stunned to view newly enhanced images sent last month from the Mars surveryor, Spirit. Ancient ruins of what appears to have been a fairly advanced society were discovered. Also noted was a strange arch-like structure. NASA's Jet Propulsion unit hopes to further enhance the images to get a clearer view of these highly unusual objects.

"At present we need more information from Spirit before any speculation can take place," the NASA spokesman concluded.