Roy G Krenkel, "RGK", was born July 11, 1918. In his youth he studied art until World War II intervened. After military service Krenkel studied under Burne Hogarth, in a "class" which included Frank Frazetta, Al Williamson, and Joe Orlando. His work soon appeared in early EC comics and his collaborations with other artists created some of the most striking comic pages of the day.

Admired by fellow artists as a meticulous craftsman and layout designer, Krenkel worked at anything and everything, from comics to magazines, to books and "standard art" (paintings). Close friendships were established with Frazetta, Williamson, Orlando, Wallace Wood, and others. Donald A Wollhiem, then editor/publisher of Ace Books, forged a working bond with Krenkel which produced many memorable cover paintings for science fiction and fantasy art. His often intricate pen and ink drawings graced the interiors of sf and fantasy books throughout the 1960s-1970s.

Throughout his career Krenkel often laid out (penciled) sheets (pages) for other artists to ink, thus influencing some who would become recognized in their own right, passing on something quite enduring from the artist who thought his own work was "disposable".

This article is an expansion of an email sent to erb-list, an Edgar Rice Burroughs Listserver, on July 10, 2017 ... and thus misses being exactly the 99th anniversary of RGK's birth by 24 hours. How's that for (cue eerie music) coincidence?

The images contained in this article are by illustratior/artist Roy G Krenkel (see sidebar, right). Attributions were intended, but the source information has been lost over the years. Most of these images were originally scanned from three pulps, late 1960s era, which included Amazing, Analog, and Fantastic. Other images are from private collections and are used by permission.

Now that the "big machine"* is running again, and many pressing problems have been dealt with, I have had some time to go through way too much stuff on the computer (and still revamping erblist.com, too) and addressed a folder containing 1173 images by Roy G Krenkel.

* Tangor's 8 core, huge ram, multi-terabyte system that went tits up for five months. Folks on "the list" knew about it—you on the web can certainly relate!

By the time I got through (an hour later) it turned out there were 679 UNIQUE images, of which I saved only the highest quality (I can always dumb down or make smaller any image, just can never upgrade or make larger, rules of digital imaging and all that happy stuff).

What I observed, during this process, is that RGK had a special knack for the small compact image. This talent is in addition to his more famous intricate pen and ink drawings and the even more prominent cover paintings for a boat load of ERB paperbacks from the 1960s to late 1970s.

The small stuff I remark upon is artwork that is clearly "Barsoom" but was used as decorations for SF mags such as Amazing, Fantastic, and Analog. Little bits and pieces (sample below ... and this image is larger than what actually appeared in the magazine). Before I sold off my digest sized pulp mags I scanned a bunch, particularly for artists like RGK, back in 1998. At the time it was just get it done, no analysis, no nothing but turn the page, slap on scanner, crank it out, move on to next ... and I missed the obvious: RGK was a master of "small art".

I'm not talking about his work in comics, of which he became a giant, not only in his own right but most especially when in collaboration with Frazetta, Williamson, Wally Wood and others. For that body of work alone RGK will be long remembered by fans of "small art". I'm specifically taking about the decorations, the small image, the thing that makes text flow pleasing to the eye in a double column presentation on newsprint in digest sized magazines that (at the time) sold for 40¢ or so. I know I am dating myself. (sigh)

These images, in real life, measure in mere inches... none are larger than six inches or smaller than one and one-half. They had to be small to reproduce properly as photo enlarging/reduction can do only so much, else fine details will either be lost or bloated beyond proportion. The skill and dedication to produce physically small art boggles my mind, and might yours as well if you think about it.

Above illustrates the "size" of RGK decorations in pulp magazines.
The "body text" just visible was usually 8.5 pts to 10 pts in size.

A mood. A scene. An emotion. An action. These RGK accomplished with deft skill with ink, primarily, and ink and pencil shade for the black and white interiors of a half dozen pulps from the 1960s on. Decorations. Little images. Other artists coming on line about that time copied this style, with their own skills of course!, and those newsprint pulp pages came to life not only in word and imagination, but as a delight to the eye as well.

RGK seemed, at times, like a machine with the rapidity and repeatable craftsmanship in churning out hundreds of these small art wonders. Richard Garrison, a one time member of erb-list, lived in the apartment below Krenkel in the last years of the artist's life. Their friendship was such that at RGK's death he was given piles of sketchbooks, loose pages and other small art. RGK, it seems, could not still the urge to scribble—only death could do that. 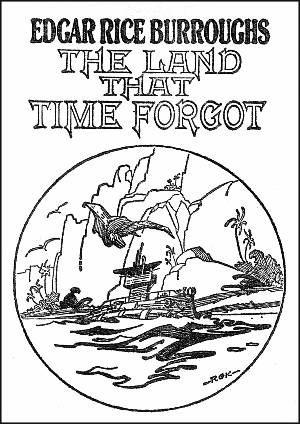 When it came time for the ACE editions which helped propel ERB back into the mainstream circa 1963, RGK was well practiced in the small art that graced the frontispiece/title pages with images that suggested an "image" to the reader as they turned past page one and got lost in the story which followed. A few of those images have become iconic (the circular Land That Time Forgot series, for example).

Roy was a friend of and member in good standing of fandom—Edgar Rice Burroughs fandom in particular. His generously donated "small art" graced the pages of ERBdom, ARMA, the Burroughs Bulletin, Xero, Wally Wood's Witzend, among others. Some images related to the interior text, others were merely decorations that elevated the printed page to art gallery and gorgeous eye-candy. Otherwise "simple fan stuff" sparkled wtih images by RGK.

Over the years I have collected images willy nilly on the web, never assuming I have it when a right click and save will toss it on the hard drive. Hence the many duplicates I had to remove during this clean up session, in all different sizes, resolutions, file types, color count (from 2 color to 32 million) but I don't begrudge either the habit of collecting, or the chore of deleting as the end result is a wonderful collection of images. Enjoyable in and of themselves but also, more importantly. these little small pictures are time machines that take me back to that time and place when I first encountered, and fell in love with, one man's vision of something fantastic and NAILED the "presentation".

All artists doodle, that's what sketchbooks are for, but not that many manage to doodle their way into the popular memes of publication and stories the way RGK accomplished. This particular project reminded me, actually might have reinforced, a greater appreciation for art that speaks to the subject, the eye, and the emotion to which it is attached. Story art is not fine art, never has been, but it is an art form that can have an even greater meaning than that mural sized masterpiece...