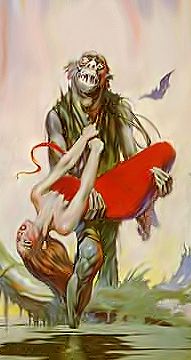 EMOTIONAL CREATURES: The Romance of The Monster Men

Ed Burroughs hinted, hooked, or slipped in so many different angles in every story that he could have written sequels for 100 years. Asides a page or less in length have fascinated ERB fans for generations. Philip Jose Farmer is in the process of writing such a pastiche regarding the skeleton of the Conquistador Tarzan found (The Dark Heart of Time).

The details of imagination, speculation, or fabrication are what makes the stories fresh, even after science has surpassed Ed's predictions. His primate studies (probably speculation on his part) indicate behaviors which are now being chronicled in the wild. If guessing, he was pretty darn accurate for the most part! As recently noted on ERBList his science wasn't far from today's actuality, nor was he wrong in stating that romance is romance--that which makes boys and girls giddy hasn't changed one iota. 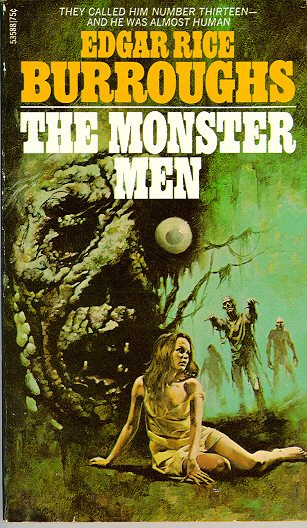 Burroughs knew people. Simply, he realized that neither time or environment can change the motivations of homo sapiens. Most Burroughsian heroes are homo saps who have to be clubbed severely about the head and shoulders before they realize love and affection exists in the gal before them. The reason why his stories remain interesting is because he wrote about people and the social conventions which have existed for humans since Ugh and Ughette sat around the campfire grilling Mastodon steaks for the itty bitties.

Humans are emotional creatures, for all their skills with tools or science--flint making to computerized weapons--and that which makes the heart beat faster, whether danger, excitment or adoration, will plague mankind long after we have settled the galaxy and the Second Federation of Human Worlds has collapsed upon itself.

This understanding comes not from Ed Burroughs' personal experiences only but from his study and understanding of the classic stories of the Greeks and Romans. The best part of "classical" is "classic," which means his stories are classic in nature: superheroes, super-ordinary, super-dumb... the motivations of human beings in the past continue to motivate us and will motivate us long after the sun has grown cold. All the rest is window dressing.

What a horrid creature! But on the same instant his eyes fell upon another borne in the arms of the terrible one. This one was different--very different,-- soft and beautiful and white. He wondered what it all meant, for everything was strange and new to him; but when he saw the eyes of the lovely one upon him, and her arms outstretched toward him, though he did not understand the words upon her lips, he knew that she was in distress. Something told him that it was the ugly thing that carried her that was the author of her suffering.

Number 13, of course, rescues her. Later in the novel, after many adventures and misadventures, the professor's daughter is again rescued by Number 13, who is now known as Bulan. Things had been grim for the girl until Bulan arrived, but during their flight with the two monsters Number Three and Twelve, she feared her rescuers as much as the head-hunting Dyaks pursing. An undesired suitor named Von Horn had told her chilling tales of the monstrous creatures created in her father's island laboratory.

As Virginia Maxon saw the fine features of the giant where she had expected to find the grotesque and hideous lineaments of a monster, she gave a quick little cry of pleasure and relief.

"Thank God!" she cried fervently. "Thank God that you are a man--I thought that I was in the clutches of the hideous and soulless monster, Number Thirteen."

The smile upon the young man's face died. An expression of pain, and hopelessness, and sorrow swept across his features. The girl saw the change, and wondered, but how could she guess the grievous wound her words had inflicted?

How could she know that Number 13, Bulan, had fallen hard for the girl from the first moment he saw her? ERB's prose connects the reader to the feelings and emotions felt by this man and woman. He, from blank mind to functioning adult, has no concept of the world, yet he knows that Viginia Maxon is his sun and moon. Though emotionally injured by the girl's disgust of the monsters, which he considers his brothers, Bulan is determined to see the young woman to safety. During their time together in the island jungle, avoiding recapture by the pirates and the jungle's dangerous creatures, Bulan's solicitious protection silently wins the girl over.

Virginia Maxon thought that he must have some good reason of his own for wishing to conceal his identity. At first she wondered if he could be a fugitive from justice--the perpetrator of some horrid crime, who dared not divulge his true name even in the remote fastness of a Bornean wilderness; but a glance at his frank and noble countenance drove every vestige of the traitorous thought from her mind. Her woman's intuition was sufficient guarantee of the nobility of his character.

From so little do great things come in a Burroughs romance novel; his works are all romances in the greater sense of the word. Each hero and heroine toil mightily through adventures of wonderous imagination, toiling together and apart and together again, to ultimately come to the realization of love and mutual desire.

"Poor things," murmured the girl, "but yet they are better off, for without brains or souls there could be no happiness in life for them. My father did them a hideous wrong, but it was an unintentional wrong. His mind was crazed with dwelling upon the wonderful discovery he had made, and if he wronged them he contemplated a still more terrible wrong to be inflicted upon me, his daughter."

"I do not understand," said Bulan.

"It was his intention to give me in marriage to one of his soulless monsters--to the one he called Number Thirteen. Oh, it is terrible even to think of the hideousness of it; but now they are all dead he cannot do it even though his poor mind, which seems well again, should suffer a relapse."

"Either fact were enough to make them repulsive," replied the girl, "but it is the fact that they were without souls that made them totally impossible--one easily overlooks physical deformity, but the moral depravity that must be inherent in a creature without a soul must forever cut him off from intercourse with human beings."

Burroughs knew how to use the buzz words that work with any generation, even one as morally lax as that which overlooks White House indiscretions. There is no doubt of Virginia Maxon's fear and loathing, nor her affection for her father. We know this. We feel what she feels. We also feel Bulan's sense of confusion and unhappiness. Yet, by the time these two have been together through thick and thin, we see the transformation of attitudes that sweep aside all obstacles.

It was on the fifth morning, when Virginia awoke, that she found Bulan rolling and tossing upon the wet ground before her shelter, delirious with fever. At the sight of the mighty figure reduced to pitiable inefficiency and weakness, despite the knowledge that her protector could no longer protect, the fear of the jungle faded from the heart of the young girl--she was no more a weak and trembling daughter of an effete civilization. Instead she was a lioness, watching over and protecting her sick mate. The analogy did not occur to her, but something else did as she saw the flushed face and fever wracked body of the man whose appeal to her she would have thought purely physical had she given the subject any analytic consideration; and as a realization of his utter helplessness came to her she bent over him and kissed first his forehead and then his lips.

"What a noble and unselfish love yours has been," she murmured. "You have even tried to hide it that my position might be the easier to bear, and now that it may be too late I learn that I love you--that I have always loved you. Oh, Bulan, my Bulan, what a cruel fate that permitted us to find one another only to die together!"

It is this moment that readers of ERB read madly to encounter. Sometimes it is the woman, at others the man, but there is always that moment when sudden realization occurs. Virginia and Bulan do survive, and though there is more adventure to face, they do so bravely and together. And, at the conclusion of the novel, they are to be wed. THE END.

The Monster Men follows an emotional formula that Ed Burroughs utilitized in the majority of his books. Barney Custer and Emma von der Tann, the principals of The Mad King suffer as many near misses of the heart, though Barney knows early that the princess of Lutha is the only woman he will ever love...but cannot because of their stations. Tara of Helium finds herself falling for a no-metal (no country) panthan in Chessmen of Mars. Tarzan watches Jane Porter from the jungle, both disturbed and drawn to the tarmangani (white) she who has entered his jungle. David Innes falls head over heels for a savage barbarian girl (At The Earth's Core). Carson Napier sees a woman in a garden and, though it means his death to approach the unapproachable, he must speak to her. Intellectual Waldo Emerson Smith-Jones stranded on a jungle island is befriended by a primitive girl who loves him unabashedly.

No matter the world or situation, we can depend on ERB to show us how human beings can fall in love. We expect it, we demand it, and we are never disappointed.

Barsoom's deserts or Tarzan's wet jungles, Napier's cloud-scraping trees or Innes pondering an upcurving horizon, even Number 13's tropical islands, are merely backdrops to the love, hate, sorrow, despair, loss, and triumph we all can understand. The reader and author are linked at the hip in this regard--The Giddy Factor!