Jess has been a co-administrator for the FaceBook group "For the Love Of All Things Edgar Rice Burroughs" since retiring from an IT job and other joys of workaday activities. His enthusiasim for ERB (1875-1950), who created Tarzan and John Carter and a pantheon of other heroes and heroines, is immense and tireless.

This article addresses a long standing query by fans of Tarzan regarding the Kavuru Pills, a monstrous method of extending human life to near immortality, as related in Tarzan's Quest (1936).

Mr. Terrell is also an avid collector of ERB, and has fully embraced the new publishing ambitions of ERB, Inc., including the new ERB Universe books.

Having just read the recently released Tarzan: Battle for Pellucidar Jess uncovered the offical stance regarding the Kavuru Question!

Read on for the evidence! 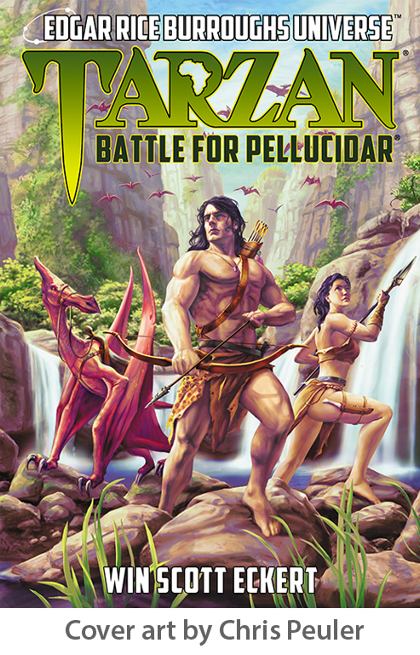 *Formatted for the web with additional commentary by Tangor, ERBlist-ERBmania! Editor

But, fans have long wondered if Tarzan did take the Kavuru elixir?

Because, in Tarzan's own words, "the way that they obtained one of the principal ingredients was hellish. They kidnaped young girls, killed them, and removed certain glands."

Considering the ingredients, would Tarzan take such a thing?

No, certainly not in its original form—Tarzan and Jane are not cannibals.

New information has come forth in the just released Tarzan: Battle for Pellucidar where Tarzan speaks of the Kavuru elixir and reveals:

... an American doctor, (who) succeeded in artificially synthesizing and reproducing the elixir from inorganic compounds.

The key word is "inorganic" meaning no one was harmed in the process of creating a synthetic elixir that offers longevity. Tarzan goes on to say in Tarzan: Battle for Pellucidar that he and members of his family have taken this synthesized Kavuru pill based on inorganic compounds.

I need to clarify this is a longevity elixir that offers "long or extended life." Tarzan calls it "perpetual youth." To be clear I do NOT mean immortality, nor do I mean invulnerable. Tarzan can be wounded, he can be shot, he can be killed, and we know he can be conked on the head. But if he avoids fatal hazards then he has the possibility of a very extended life.

This is the official explanation for the Kavuru question from Edgar Rice Burroughs, Inc. Explanations, offered by other authors, are outside of ERB canon.**

** It must be stated that ERB's original Kavuru Pill remains. That a scientist managed to achieve the same results via inorganic means can't erase the original as stated in Tarzan's Quest. This is demonstrably ipso facto. —Editor.

As early as his first written work "Under the Moons of Mars" (later published as A Princess of Mars), ERB's characters often had opportunities to long life. John Carter is possibly immortal. His Martians have life spans of a thousand years. Those in Pellucidar are forever young under an Eternal Sun. Carson, on Venus, could get a rejuvenation shot good for 200 years, each shot! Tarzan was not neglected: a witch doctor for immortality or Kavuru pills.

What is NOT stated anywhere in the ERB Canon—those books written by Edgar Rice Burroughs—is who, besides N'kima, used those Kavuru Pills!

To provide background information for those who are unaware, (the) following is the conversation referenced above that Tarzan had with American flyers while serving as an RAF Colonel in World War 2 where Tarzan describes his two encounters with longevity treatments. Note that Dr. Reyd is one of the friendly Dutch guerrillas allied with the Americans. Except for Tarzan, all other speakers are American military.

From Tarzan and the Foreign Legion, Chapter 25:

(Dr. Reyd asked:) "... but how about perpetual youth? You have really seen instances of this, Colonel?"

"When I was a young man," said Tarzan, "I saved a native from a man-eating lion. He was very grateful, and wished to repay me in some way. He offered me perpetual youth. I told him that I didn't think such a thing was possible. He asked me how old I thought he was, and I said that he appeared to be in his twenties. He told me that he was a witch doctor. All the witch doctors I had ever seen were much older men than he; so I rather discounted that statement as well as his claim to being able to confer perpetual youth on me."

He took me to his village, where I met his chief. He asked the chief how long he had known him. 'All my life,' replied the chief, who was a very old man. The chief told me that no one knew how old the witch doctor was; but that he must be very old, as he had known Tippoo Tib's grandfather. Tip-poo Tib was born, probably, in the 1840's, or, possibly, the 1830's; so his grandfather may have been born as long ago as the eighteenth century.

(Tarzan continues:) "I was quite young and, like most young men, adventurous. I would try anything; so I let the witch doctor go to work on me. Before he was through with me, I understood why he was not conferring perpetual youth wholesale. It required a full month of concocting vile brews, observing solemn rituals, and the transfusion of a couple of quarts of the witch doctor's blood into my veins. Long before it was over, I regretted that I had let myself in for it; because I didn't take any stock in his claims."

Tarzan ceased speaking as though he had finished his story.

"I never gave a thought to your age, Colonel," said Captain Jerry Lucas; "but I remember now that my father said that he read about you when he was a boy. And I was brought up on you. You influenced my life more than anyone else."

"I give up," said Dr. Reyd. "But you said that you had known of two instances in which perpetual youth was achieved. What was the other one. You've certainly aroused my interest."

"A tribe of fanatics in a remote part of Africa compounded a hellish thing that achieved perpetual youth. I mean the way that they obtained one of the principal ingredients was hellish. They kidnaped young girls, killed them, and removed certain glands.

"In the course of tracing a couple of girls they had stolen, I found their village. To make a long story short, my companions and I succeeded in rescuing the girls and obtaining a supply of their compound.(*) Those who have taken it, including a little monkey, have shown no signs of aging since."

Following is the conversation from the last chapter of Tarzan's Quest, where the participants discuss what to do with the Kavuru elixir. It is only implied that some people may have taken the Kavuru but that does not mean that everyone took it. Note that so far as we can tell, Tarzan does not take an active part in this conversation. From Tarzan's Quest, Chapter 31, "Wages of Sin"

Three weeks later a party of six was gathered before a roaring fire in the living room of Tarzan's bungalow far from the savage village of the Kavuru. The Lord of the Jungle was there, and his mate; Brown and Annette sat upon a lion's skin before the hearth, holding hands; Tibbs sat decorously on the edge of a chair in the background. He had not yet become accustomed to sitting on terms of equality with titled personages. Little Nkima, with far greater poise, perched upon the shoulder of a viscount.

"What are we goin' to do with this box of pills?" demanded Neal Brown.

"Whatever you wish," said Jane. "You were willing to risk your life to get them. If I recall correctly, I think you said something to the effect that if you had them back in civilization, they would make you 'lousy' with money. Keep them."

"No," replied the American. "We all risked our lives, and anyway you were the one that really got them. The more I think of it, the less I like my scheme. Most everybody lives too long anyway for the good of the world—most of 'em ought to have died young."

"I'll tell you what we'll do. We'll divide them. There will be five of us that will live forever."***

*** [This line of dialogue is not credited but is presumed to be Neal Brown.]

"And be beautiful always," added Annette.

"If you will pardon my saying so, Miss," observed Tibbs with an apologetic cough, "I should rawther dislike thinking of pressing trousers for so many years; and as for being beautiful—my word! I'd never get a job. Who ever heard of a beautiful valet?"

"Well, we'll divide 'em anyway," insisted Brown. "You don't have to take 'em, but be sure you don't sell none of 'em to no cab driver princes. Here, I'll divide 'em into five equal parts."

"That's right," said Brown. "We'll make it six parts. He's sure a lot more use in the world than most people."