A NEW form of Fan Short Fiction is Born!

Bridge and Tangor bring a new challenge to writers and fans. The story below was the first. To see where it has gone since CLICK HERE!

Green Arrow, Robin Hood and Tarzan walked into a bar.

There was a counter by the door womaned by a hat-gun check gal but other weapons were permissible, so they carried their portable arsenals to the bar.

Robin Hood slid off his quiver and counted his arrows, Tarzan twanged his bowstring to make sure it sounded right, and Green Arrow checked the battery level in his smoke bomb, guided missile and laughing gas arrows.

The bartender, as was his custom, gave them his customary customer greeting: "What'll ya have?"

"I'd like a key limeade cocktail and a pickle," smiled Green Arrow.

"I'll have a flagon of ale and a sausage," said Robin Hood.

Tarzan, who was already shelling some of the free peanuts, said, "I'll have an absinthe and one of those chocolate doughnuts."

The barkeep brought the trio everything but the doughnut. After setting the nourishment before the men, he turned to the pastry platter, removed the see-through lid, and grabbed one with his meaty hand. He acted as if he would hand it to Tarzan but, instead, suddenly tossed it into the air, saying, "Drinks Free! If you can nail the target."

The bow was already in Tarzan's hands, an arrow nocked, even as the barkeep spoke. As the doughnut reached the apex of its flight, the ape man let loose of the string and the arrow pierced the barman's thumbprint on the frosting, nailing the pastry to the wall, the arrow pinning it there in the 12 o'clock position.

The doughnut was effectively fastened to the wall.

The barkeep stepped from behind the counter, walked to the wall and, with a bit of chalk, drew a Kilroy head below the doughnut so it "sat" on Kilroy's bald pate.

"May I?" the barkeep gestured, pointing to their bows. Tarzan grinned and tossed his over. Robin Hood offered an arrow. Green Arrow crossed his arms and waited to see what this fellow might do. The barkeep drew the bow to full round.

"All three of you missed the real target," he said. His arrow sank into the open center of the doughnut. Returning Tarzan's bow, he said, "Bullseye!"

Tarzan was impressed. "Good shooting. Tell us your name."

* Tellus is Latin for "earth". For the Roman goddess see here.

** A Bar Drabella is a new class of Drabble that has three premises: 1. All are a "guy walks into a bar...", hopefully a joke! 2. The drabella must include at least one Edgar Rice Burroughs character, or ERB himself. 3. No longer than 500 words.

If you want to play, send your Bar Drabella to tangor at erblist.com for consideration. No hateful or prurient submissions will be accepted. Family Friendly, Please!. 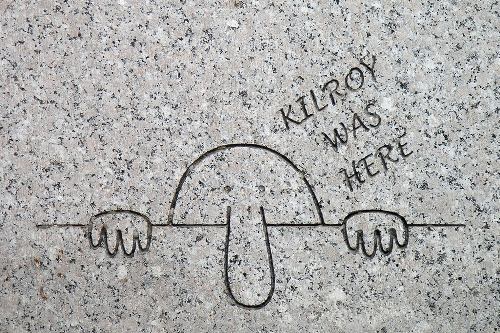 Those not famliar with "Kilroy" can learn more here.
Image (Wikipedia): Kilroy as engraved on the
World War II monument in Washington, D.C.