Bridge brings eager readers yet another of his exceptional insights into the human condition during one of the most iconic holidays of the year!

Who is Billy Byrne?

For netizens unfamiliar with the name, Billy Byrne is the principal character in a pair of novels by Edgar Rice Burroughs (1875-1950). The novels "The Mucker" and "Return of the Mucker" are now available under a single title. 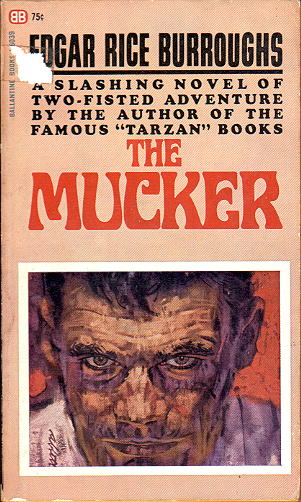 The streets and back alleys of Chicago were covered with snow and the corner Santas were ringing their bells as a teen-age Billy Byrne made his way through the icy muck to the 7th Street Mission, a place he would not normally frequent.

In his hand he clutched the ticket for the drawing, which had been mixed in with a few crumpled dollars from the pocket of the drunk he had rolled. The date on the ticket was today's, and if he got to the Mission in time he might accidentally win one of the prizes. This he could, in turn, take to a pawn shop for enough to buy a bucket of beer.

The mission meeting room was filled with an odd mix of people, some dressed in finery, as they were among the rich of the Windy City who helped support the Mission to keep the homeless ragamuffins from drifting into their own neighborhoods, and some of them were the poorest of the poor, who had been given lottery tickets by the Mission staff in return for voluntarily showing up at a number of church services.

Billy saw the table where the prizes were laid out. Junk, pure junk. But some fools would pay for junk. He saw a toy truck, an electric mixer, a stack of old Tarzan books, a doll, a set of mismatched dishes and other items for which he had no real use.

About that time, a jolly fat man walked to the table with some more tickets, apparently just having gotten the latest batch from the volunteers at the entrance of the Mission, where some homeless were still venturing in. "Okay folks," he boomed. "It's time for the next drawing, and the prize will be..." He stopped and looked over the merchandise. "This doll!" he said, holding it high for all to see.

It wasn't much of a doll. It had uncombed hair, a plain dress, and a bootie on one foot but other than that there was nothing to recommend it. Billy thought it was an ugly doll, but it still might bring a few bucks. People were looking for cheap Christmas presents.

"Oh mommy, daddy!" Billy heard a child's breathless voice next to him. "I hope my ticket will win the dolly!"

He looked at the threesome—a girl about 8 and her parents. Their clothing was nothing but rags. Their shoes had holes. They looked like rejects from the homeless camp—and their odor was not pleasant. Byrne dabbed at his nostrils with a crusty handkerchief, then looked at his ticket. It was No. 777, his lucky number.

Billy beamed, and gave his attention to the man who was rotating the ticket drum to mix them up. Billy's greedy smile of anticipation dominated his face.

The little girl had closed her eyes as if in prayer. He could see her lips moving, probably hoping some angel would intervene and give her the doll.

The ticket man pulled a ducat from the drum and called out, "Number 777."

As Billy moved forward to claim his prize, he heard sobs from the little girl beside him. "Oh mommy... oh daddy... I did so want that dolly—"

The little snot, Byrne thought. Want, want, want. Kids only thought about themselves. Her parents should teach her better than to make a scene in public.

Billy handed in his ticket and was given the doll. He turned to leave with his paltry prize and happened to glance at the little girl with tears streaming down her dirty face. Never had he seen such a pitiful sight!

Suddenly, something came over Billy Byrne! It was a feeling that he had never experienced, prompting him to have an idea that—under other circumstances—would never have occurred to him. He could hardly believe that he was capable of contemplating such a thing! Yet, life is full of strange twists—and on this day Billy quickly learned that even he was subject to the caprices of the mental and emotional process.

Young Billy Byrne slowly approached the little girl, who was now bereft of all hope. He went down on one knee in front of the heartbroken child and looked into her red, swollen eyes.

"Little girl," he heard himself gently say, "how would you like to have this dolly for your very own?"

The little girl's eyes widened and her mouth dropped open, and then a smile of sheer joy brightened her face. "Oh mister man," she exclaimed. "I would love that dolly! I would take care of her and hug her to sleep every night!"

Byrne felt a near euphoric flush course through his veins as he rose to his feet. A smile crossed the young man's face, but it was a wicked smile.

Laughing hideously, Byrne waved the doll over his head as he made his way toward the exit.

Behind him, the little girl bawled herself dry.

Once outside the mission Billy chuckled. "It's not every day I get a chance to do something like that!"

He continued on his way down the snowy street. He hoped to cap his day by encountering a woman he could insult.

This, and other sentiments abound during the holiday season that crooner Andy Williams made famous as ...

"The Most Wonderful Time Of The Year!"