The fun, fabulous 50s were great times for an America weary of international intimidation and war. A period of peace and prosperity blessed our nation. Ike was right—Elvis shook his pelvis.

Editor's Note: If you are too young to remember the 1950's, no worries! Kids are kids, regardless of decade. On the other hand, if you have not read any of the Barsoom books by Edgar Rice Burroughs you don't really have to before reading this story. Lothar is an ancient city of mentalists on Mars, first encountered in Burroughs' Thuvia, Maid of Mars. 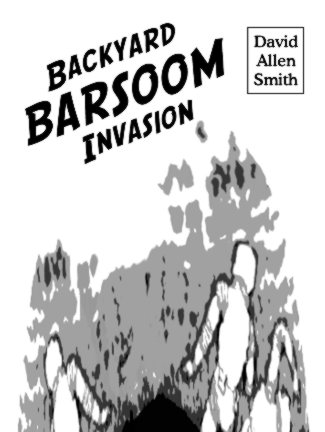 You are about to read one of those silly things that grew out of an email exchange. Put your 1950's hat on. Don your striped t-shirt, beanie cap, and slingshot in the hip pocket. Buckle up. It will be a bumpy ride down memory lane!

The mentalists of Lothar had drawn their plans of Earth conquest long before John Carter came to Barsoom. Lotharian apparitions, created entirely by the power of immense intellect had cruised through the skies of 1890s' America in the form of airships, at a time when there were no airships. Celebrated stories and photographs are well known.

Then came Carter, who single-handedly disrupted all of Barsoom, eventually rising to the rank of Warlord over the Thirty One Jeddaks. That turmoil held the Lotharians in check for a decade.

Then the worst of all things occurred: John Carter's son, Carthoris, disrupted Lothar!

Fortunately that interference did not last as the son of the Warlord had Thuvia of Parth, a one time slave of the Therns, in mind. When Carthoris and his woman departed Lothar the carefully laid plans had to be mended—and amended!

The exploratory flights resumed some twenty years later. Ships traversed the immense dark and cold voids of space, created entirely from mental energies from the extraordinary power of Lotharian thought. During those years experiments were made as regards shape, design, capability. What could be thought, these masters of mentality could create!

In that conflagration those of the third planet called World War II, Lotharians investigated the flying machines of Jasoomians. Sadly some of those investigations were witnessed and the excitable, and not too observant, humans cataloged those events and attributed the sightings to "gremlins".

For a period of time the Lotharians made their reconnaissance from a distance. Care was taken to conceal their activities, but even so what Kenneth Arnold saw from his plane near Mt. Rainier in 1952 was a "flying saucer". The Lotharians, cautious, watched the reaction and observed from afar, via their incredible mental abilities, the absurd reaction of their intended foes, deluding themselves to actually embrace these "sightings" as something popularized in Jasoomian newspapers and magazines! The public was lulled into a false sense of security and acceptance.

The 50s saw a great rise in the number of science fiction movies depicting flying saucers. Soon the American public was so jaded that the Lotharians could take progressively bolder actions as they sought to finalize their plans of controlling psychology, politics, and Earth!

On a warm summer afternoon two small boys—Donny and Mike—energetically conducted vast military campaigns in Donny's backyard. Both were born less than a year after the Japanese surrender. Both had grown up during the Korean War. For these boys, war was everywhere. It was everything. And because Moms and Dads didn't want to talk about it that made it all the more special.

"What's that?" Mike popped up from his concealment behind the pool pump.

"You got me," Donny replied.

Looking up, they saw nothing but overcast. The sound grew louder. Donny's cat Leo yowled and ran under the pier and beam house.

Then a shadow passed overhead.

"Did you see that?" Donny asked.

"That was weird," Mike replied.

The two continued gazing up into the sky, but still could not see the origin of the sound. Then, out of nowhere, a great shining disc appeared—a flying saucer! It circled around the house, hovered for what seemed forever, then lowered into the backyard, just above Donny's rusted swing-set in the corner of the backyard.

A door in the bottom of the craft opened and a beam of blue light was projected into the grass. Three man-like forms floated down in the beam, alighting softly on the grass. They were about five-feet tall and metallic blue in color. They did not have faces, but were covered with what seemed to be sensors.

Mike drew closer to Donny. "I don't like this!"

Donny waved at them while Mike shook with fear. "Hey, you robots look really cool! I'm Donny. This is my friend, Mike," Donny informed.

The foremost machine halted; the others followed suit. Its electric eyes lit up momentarily and it spoke in a raspy mechanical voice. "We are from Barsoom. You call our planet Mars. We are dispatched to study hu-manz life."

Mike nearly peed his pants. Donny poked his friend in the shoulder.

"Buck up, Mike! Hey, Mister Robot, my sister, Jane told me all about Barsoom. That's where guys fight with swords, right?" Donny rushed on, as only a sub-teen could do, "You've come a long way."

"We come to study hu-manz on this planet."

"That's swell! C'mon in the house and study all you like. Meet my mom and sister. We're about to have lunch and  watch an old Tarzan picture on Jungle Theater. Television is great. You'll like that."

"You shouldn't have said that!" Mike whispered, tugging at Donny's elbow. "They ain't the friendly type!"

"Aw, shaddup!" Donny replied, equally soto voce, but a part of him began thinking maybe Mike saw something he had missed..

The robots remained silent and began marching forward again. The situation was very threatening, but Donny showed no fear. He walked up boldly to the nearest robot and asked, "Do you want to play with us? If you don't want to play soldiers, we can play dodge ball. You'll like that."

On the right hip of each robot there hung an apparent weapon. Just then one of the robots drew his weapon and fired a hissing red beam into the dry grass. A small fire sprang up. Donny rushed to put it out with a pail of water from the pool, then backed away.

"Hey, do you guys want to play Pirates? Walk the plank?" Donny suggested. No response.

The day before Donny and Mike had built a makeshift walkway over the pool, using long, wooden scaffolding planks. The boys backed over the planks as the robots continued to advance—one, two, three...

"C'mon, Martian robots. I've got a surprise for you."

When Donny and Mike reached the other side, the robots were directly over the deepest part of the pool.

"Let's teach these bullies a lesson! Help me!" Donny whispered.

"What are you doing?"

Donny rocked the end of the plank back and forth. Mike assisted... The robots teetered precariously as they skipped and hopped in vain to maintain their balance. One by one they all fell into the water! They fumbled and flailed, but eventually sank to the bottom and lay still.

Almost immediately the blue beam went out and the saucer began ascending into the sky! The boys were left standing in the backyard with a pool of drowned robots.

Donny couldn't see the saucer anymore. He turned from the sky and looked into the pool: "Wow! He won't say anything! Look! Just like Adlai Stevenson, they're gone!"

He shook his fist at the vanished flying saucer: "We only asked if you wanted to play. We were trying to be nice!"