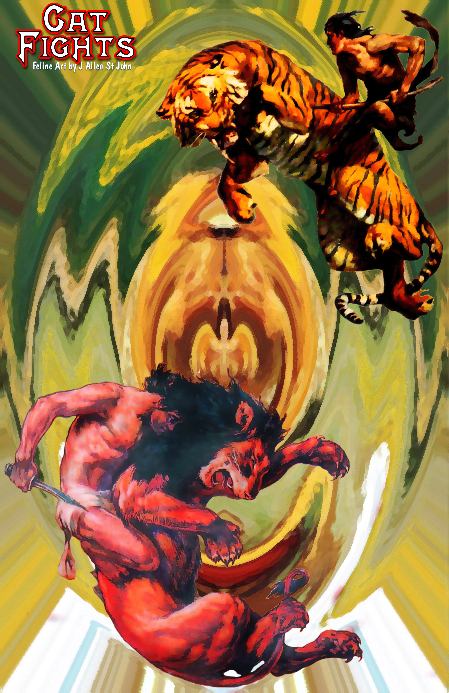 During the Coronavirus shutdown of 2020 many were stuck at home with time on their hands. Tangor created an image—and David Allen Smith was inspired to write a story.

It was late on a chill winter's eve. The full moon cast its gray light down upon the deserted alley at the top of the hill. Most creatures were fast asleep, but not cats. Silently, stealthily they strolled through the shadows to investigate, hunt or possibly fight.

An older alley cat called Claws searched through his favorite trashcan, seeking tasty remnants of fish or chicken. He was King of the Alley, the feared victor of many battles, the sire of countless kittens and a shameless bully. Slate gray and 18 pounds, he was all muscle and snarl. a street smart scrapper, if a bit long in the pointy tooth.

Then there was Fang, a popular young cat, one of the upcoming new breed, who thought they knew everything. He was big, powerful, ego-driven and ready to compete for the tom cat throne. In a dark corner he sat quietly contemplating the environment and sharpening his claws. Earlier, he had run one-hundred feet at lightning speed, and done numerous difficult climbs and high jumps. He was in tip top condition and a vicious brawler.

Fang espied Claws from a long way off with his acute night vision. He thought he smelt a whiff of hamburger arising from the can that Claws was inspecting. Fang liked hamburger a lot, so he couldn't help but saunter over to check things out. He was hardly met with a warm welcome.

"Get out of here, pussy cat! This is my can!" admonished Claws.

"I don't like your tone, old man. Someday someone will teach you a lesson in humility."

"Anytime, kitten. Hit me with your best shot!"

That's all it took. The gauntlet had been dropped. Fang advanced slowly, careful not to make any quick movements as he sized up the aging feline tyrant.

"Are you serious? Scat! You're smelling up the place," Claws said condescendingly.

He was just returning his attention to the trash can when Fang suddenly launched himself in full attack mode, impacting Claws in midair. The two fell together, rolled and grappled, both growling loudly, cat hair flying everywhere!

Claws was caught off guard, but quickly extricated himself, got up and smacked Fang with a powerful paw punch, sending him sprawling backward. But a game Fang was back on all fours instantly, ready to continue. After all, this was a battle for supremacy, for control of the alley!

By now other cats noting the considerable din had come out to watch.

Claws stepped up face to face and attempted to stare Fang down, but the later responded with a right hook to the cheek, followed by an effective left-right combination which sent Claws down. The crowd cheered! Fang quickly jumped atop Claws, but there was no quit in him. He pulled Fang's tail, causing him to cry with pain and dismount.

The the two faced off again at the center of the alley as the furry throng went crazy. The combatants paced and stared, then froze. Silence reigned...

Claws advanced toward Fang, then halted and held up his right paw, signifying a symbolic end to hostilities. "I'm done. Let's let bygones be bygones," he implored. It was a ruse, but the younger cat bought it, and hesitated.

In an instant Claws was all over Fang, raining down a merciless flurry of heavy body shots. Fang began to wilt. Then the unscrupulous Claws locked his paws securely around Fang's throat. Things looked bad.

Then an amazing thing happened. An angry rat, awakened by the late night commotion appeared from nowhere and bit Claws on the ass. He released Fang, who reacted by grabbing his tormentor with super cat strength and throwing him into a nearby open dumpster! Then Fang kicked the the dumpster hard, causing it to roll down the steep alley, gathering speed until it was racing! Claws was trapped inside as the dumpster careened downhill, finally slamming into a parked car with a heavy thud!

Claws could not be seen. But the pathetic whines that came from inside the dumpster were not those of an injured cat, but a defeated one. After a long moment Claws crawled out of the dumpster and was last seen slinking away into the darkness.

Loud cheers sprang from the cat crowd! There was a new sheriff in town! Fang looked around at the many adoring feminine feline faces, and congratulated himself on his victory. Now he was King of the Alley! Oldsters would respect him. kiddie cats would look up to him, and best of all, he would be the object of much lady cat attention.

All was well for Fang in the alley except for one thing: a huge, muscular half-Ocelot pushing his way through the whiskered crowd. He stopped before a surprised and tired Fang.

"Hey, champ, my name is Tiger. Are you ready to rumble?"